A Wild Camp on Mull and lunch at Ulva Boathouse

Friday came , as did the promised sunshine,  as we made the familiar sailing over to Craignure from Oban. The West Highlands from Loch Lomond were looking superb under clear blue skies – even Ben Nevis’s often cloud draped summit was clear, as the ferry coursed through the choppy Firth of Lorne. The wind was brisk and, in mid May, still pretty cold.

Oh that feeling of peace and freedom as we drove up the Tobermory road then took the left turn at Salen village, headed for wonderful Loch na Keal and another world! Stopped off for half an hour at the large parking area which is a favourite of wildlife watchers and is close to a sea eagle nest. A guy from Springwatch was filming (or trying to) and we soon found out that the female –  the hoor – had abandoned the nest and gone off with another male.

Her mate, poor soul, had also taken off, hoping to find a new partner so….there was not much for Mr Springwatch to see, or film. Apart from, that is, an otter which was hunting off the rocks.But Mr S didn’t even look at it, clearly his mission was ‘sea eagles.’

We knew where we wanted to pitch the tent, high above this big sea loch, on a grassy platform which I’d camped on before. But first, lunch on the island of Ulva beckoned, at a gem of a little café called The Boathouse. A small boat comes across and takes you over (£6 return each), just two minutes sail across the crystal clear water. It’s one of my favourite places for lunch, a tiny slice of paradise on a warm, sunny day.

Got an outside table and enjoyed a plate of their Cullen Skink(smoked haddock soup) while Chris had langoustines. Lovely food in an unbeatable location.

Walked out towards the basalt cliffs with stunning views of Ben More, Mull’s highest hill at over 3,000 feet , which rises straight up from the sea loch into a shapely pyramid.

Bluebells were out, creating a lilac haze over the moorland and down by the shore.

It had been too tempting to stay on Ulva for the afternoon, but now we worried that our camping pitch might get pinched as Mull starts to get (relatively) busy from May onwards.Got back across to Mull itself on the last boat at 5pm and scuttled back to the grassy bank we had in mind. Luckily, no one was there, nor was anyone parked in the small area of rough ground opposite. Getting parked off single track roads can be a nightmare, especially on that route. You have to know where the very few possibilities are.

In no time, the tent was up and we’d popped open the Champers to toast to , hopefully, a great weekend ahead.

The light was really glorious over the Gribun cliffs across the loch. It’s one of my favourite views in Scotland with the Ben More group of shapely hills looking their best too.

BBQ’d some steak and sausages for dinner and sat out on the chairs watching the sun go down slowly though at this time of year, it’s around 10.30 -11pm before it gets dark. The wind wasn’t warm (it never is in Scotland) but one upside of it was…no midges!

My usual crawl out of the tent in the wee small hours, too much tea taking its toll, had me looking up in wonder at the night sky. I’ve never seen clearer skies than those in the Hebrides though mostly in winter when the Milky Way looks close enough to touch. Now, at 2am, near mid summer and the glow of dawn not far off and with a full moon, the light was such that you could have walked up Ben More without a torch.

Leisurely breakfast and gallons of tea on a fine sunny morning.

At 11.40am, the Turus Mara set sail(well, fired up its engines) from the jetty at Ulva Ferry with its maximum of 12 souls on board plus two crew.

45 mins later and we were manoeuvring around the entrance to Fingal’s Cave on Staffa,  an astonishing piece of rock architecture, like a cathedral rising out of the deep, cold ocean.

It knocks the Giant’s Causeway for six though the geology is basically the same – black basalt hexagonal columns but here, the scale is much grander and the location far more impressive. There are very few people ever on Staffa at the one time too, usually one boat load only.

We were given an hour to explore once we tied up at the tiny jetty.I was a bit miffed that they hadn’t played Mendelssohn’s “Hebrides Overture’ as we approached the cave, something the boats usually do. (The composer was inspired to write that famous piece after visiting Staffa. ) It sounds cheesy but it brings tears to many an eye, it’s just all so grand. But they forgot this time, the bandits! A hanging offence!

The hexagonal rocks make for great stepping stones though there is also a handrail to steady you, as you head back to the cave for a closer inspection.

I’m actually not a big cave fan, finding them gloomy and a bit depressing but this is quite different.

Then we scooted up onto the top of the island and found a soft grassy hollow in which to enjoy the sunshine and have a snack lunch.It was an airy and spectacular perch with the cave directly below us and the ocean and islands – Tiree, Coll, Rum, The Dutchman ‘s Cap, Lunga – all around.

Then back down the steep steps to the jetty and onto the boat and onwards to Lunga, another 40 mins or so away and another of the wild, uninhabited Treshnish Isles.

We had two hours on Lunga, the island covered in a haze of lilac bluebells and pink sea thrift.It looked gorgeous.Ten minutes along a rough track took us up to the grassy banks where hundreds of puffins nest.I have never seen anything like it. They were everywhere.

By going down flat on the grass and keeping low, we were able to get within 1-2 metres of them and just watch them truly up close and personal. Nesting hadn’t begun so they were courting and pairing off, the males bringing little gifts of grass to their mates. 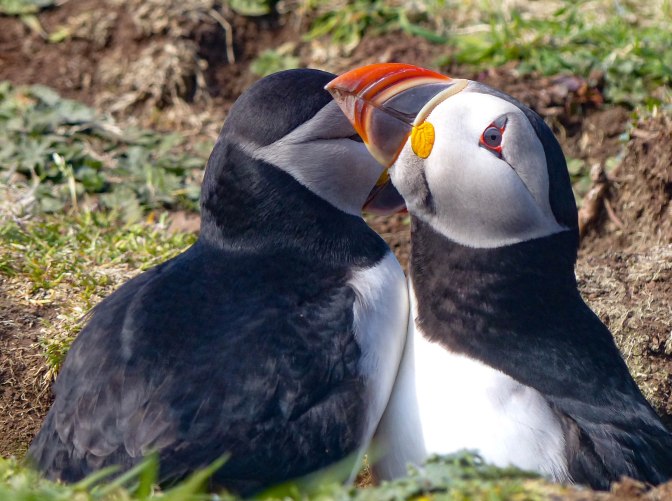 And then suddenly they would shoot down into their burrows, disappearing pronto as a dark shadow cruised overhead – Great Skuas or Bonxies – aggressive predators on the look-out for a tasty snack. Yet I love seeing the skuas also – they are so impressive, these big brown sea birds of wild, cold northern coasts and waters. Fiercely protective of their own nests(as we can vouch for when we were attacked by them later that summer on St Kilda.)

The danger passed and out the puffins came again, wobbling about, with occasional low-pitched gurgling conversations with each other. I found it difficult to pull myself away and explore the rest of the island, including the Harp Rock, where thousands of guillemots and razorbills nest.It was a joy watching the birds, with their superb plumage and multi coloured beaks.I’d been a bit sceptical about the trip being called their ‘puffin therapy’ trip but it was true…..watching them was good for the soul. As the advertising said, it was , at £65 each, much cheaper than a shrink! 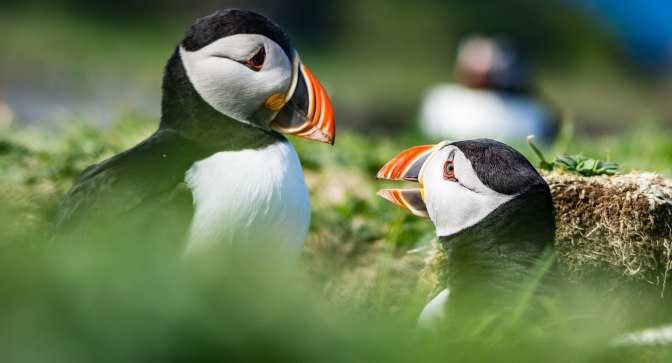 Eventually, Chris persuaded me to get back on my feet and we made our way part way along the. arrow track to the Rock. I had seen that area before and knew I preferred the puffins. It was also a bit vertiginous and not the easy track I’d used the last time I was on Lunga, when the boat had landed at a different spot. Chris was happy just to head up to the top of the island and enjoy the views so we clambered up another track onto the top of the island with its beautiful 360 degree views of ocean and islands. On a bright sunny and warm day like this, with the Atlantic sparkling and deeper blue than the Aegean, it was idyllic.

Two hours were suddenly up and back to the boat we wandered. The sail back to Mull took about an hour, taking us past some of the other flat topped, cliffy islands of the Treshnish chain, passing Atlantic Grey seals basking on rocks and looking out for dolphins and whales (no luck this trip.)

As we sailed past Ulva island itself, a herd of red deer took off, alarmed by the sound of the boat’s engine.

By 6pm, we had tied up at Ulva Ferry again, absolutely thrilled at the day we had had. For lovers of wild places and the great outdoors – a must.

Ballygowan for Dinner – quite unique

Treated ourselves to dinner in Ballygowan, a very unique little place 8 miles north on the Loch Tuath road.It’s basically the front room of a family croft house, quite small, so essential to book in advänce.Mains are £10, other courses £5.BYOB.Great value and very good homecooked food.The rubharb and lemon crumble was a masterpiece.An experience.Gorgeous location.

Cold breeze back at the tent but a glorious evening so we walked about a bit, admiring the views, glad there were no midges.

Vino for Chris and gallons of tea for me plus chocolate.Home tomorrow, Sunday but 36-48 hours on Mull is better than not at all.

3 thoughts on “STAFFA AND THE TRESHNISH ISLES (AKA Puffin Therapy)”