I’d always had a hankering to see Connemara.Part of the Gaeltacht, a windswept, sea lashed country.Oscar Wilde had described it as having a  ‘savage beauty.’ That was enough for me. It was around 2hours 10 mins driving time from our base in The Burren, near Bell Harbour.Ok, a longish day out with plenty more driving once we got there, but what the heck – Chris was up for it as he enjoys driving (I do too).Seize the day!

After a relaxing breakfast on our ‘morning’ terrace watching a robin flit in and out of his nest in the wall of our garden,  feeding chicks, we set off.

We headed for Galway through Kinvara and Kilcolgan, a 45 minute drive away. Then we picked up the N59 out to Maam Cross. The roads were good, not busy except around Galway. We decided to take this route as it was the fastest option of getting to Roundstone and the wilder landscapes beyond.The alternative was a drive along the coast through Spiddal on the R340 but with our short time, this was a drive too far.

I was on the lookout for the Quiet Man bridge near Oughterard but managed to miss it (and on the way back too!) I loved that film and getting up to Cong village would have been good too, where much of the filming took place, but it was another detour.Next time.

As the Maumturk Mountains and the Twelve Bens came into view, the road got lonelier and lovelier, crossing empty moorland dotted with the occasional lough (loch).

Now we made the detour onto the R341 and the lovely road which took us to pretty Roundstone village, in the heart of Connemara.Very well to do, newish houses with lots of land and well kept gardens lined the road; something we noticed in Ireland was the absence of many really old buildings or traditional houses.They all looked fairly modern and their size and design certainly suggested a bit of wealth.

It was a gloriously sunny day now after a cloudy start and the sea sparkled deep blue.With the mountainous backdrop it was all very much as I’d hoped it would be. 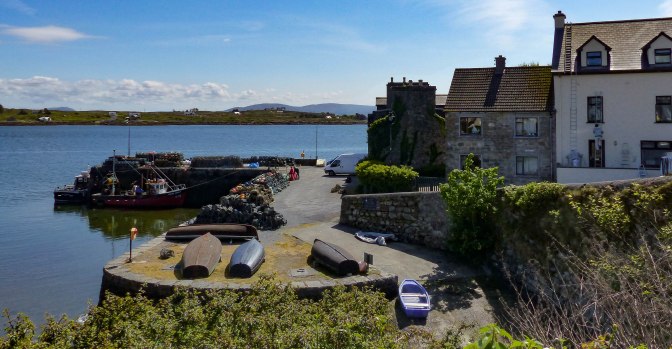 Stopped in Roundstone, with its multi coloured neat houses and harbour, a sleepy wee place on the day we visited.Got some good cafe lattes and an excellent scone in the Roundstone Cafe.I’d been on the lookout for the Bogbean Cafe as it had good reviews but it was shut.Wandered down to the harbour to see a traditional Curragh on display.It was a very pretty place all round with a beautiful old church overlooking all.The backdrop of the Twelve Bens across the bay was gorgeous.

I’d read about this in our Lonely Planet guide and also had it locally recommended , twin white sand beaches just 2 miles from the village.What a beautiful spot it was too.Often beaches are described as ‘white’ when they are not, but this was the real deal.After parking (which must get busy in peak season) we strolled the double backed shell sand beaches for an hour or so, revelling in the sunshine, the turquoise sea, distant mountains and also what I would call the ‘machair’ behind the sands. This is similar to land that backs many beaches in our own Hebrides – sandy grassland carpeted with wildflowers in summer – daisies, buttercups, clover, birds foot trefoil, vetch, harebell, gentian, wild thyme –  often to the point of being heady with fragrance.I actually felt a slight bout of homesickness at that moment, it had such a Hebridean look to it all.

Gurteen beach was perhaps the finest of the two, the other being Dog’s Bay , a more sheltered strand. Errisbeg, a 300m high hill,  overlooked all and must provide a great vantage point to view this lovely landscape.If only we’d had time to climb it!

I’ve always admired photos of this little Victorian town set in amongst the mountains and it did not disappoint. In fact, it was an even more charming place than I’d expected, all pastel coloured shop fronts and buildings, lots of cafes and pubs and shops.Sparking clean streets too (as we found all the Irish towns and villages we visited.) Very busy on a warm Thursday afternoon in May.

Bought a carry out baguette filled to the brim with Coronation Chicken, pickles and lettuce from an excellent deli,  the ‘Connemara Hamper.’ Then strolled the twin main streets.I could have spent some time in this small town, it was a delightful place.Had a browse in one of the shops selling quality woollens, very tempted to buy something as some of the designs were really stylish. I’m always on the lookout for warm jumpers as I usually live in these most of the year round, so such shops draw me like a magnet.Mind you, the temperature must have been in the mid twenties in sheltered spots – trust me to be looking at heavy Aran jumpers.I’d also hoped to get some carry out soup from the Deli but she didn’t have any.Chris says it’s my peasant blood, old habits die hard.

This 12km route is marketed as a top notch coastal detour from Clifden and it is very attractive indeed with low-lying rocky headlands and a heavily indented coastline, surprisingly well populated.

We stopped just before a viewpoint to admire the oceanic scene when way down on the coast far below, heavy splashing on the still water caught my eye.It appeared to be dolphins hunting close to shore, though given the size of them from that distance , they looked more like killer whales! Dolphins are big I know, but these seemed enormous.

We stopped in at the Connemara Visitor Centre to enjoy our baguette and found a very attractive building of local stone amidst gardens and a pond.All overlooked by cone-like Diamond Mountain.With time, it would have been good to hike up the hill as it must give tremendous views all around and is billed as suitable for even inexperienced walkers.Grabbed a tea and some cake in the centre’s cafe and sat in the sunshine of the courtyard, just relaxing and so glad we’d made it out here.Beautiful country.

I’d heard of this beach a long time ago but didn’t see much mention of it in the guide books.Strange, because it was a superb stretch of sand with an superb mountain backdrop.Perhaps even more spectacular in terms of location than Gurteen beach though the sand was mostly quite hard packed and not as white. But quite a spot.It reminded me a little of the Isle of Harris where the mountains really do plunge into the sea, amidst bay after bay of dazzling shell sand beaches.Across the bay was County Mayo, including the pyramid summit of famous Croag Patrick.

It was a beautiful drive out to this remote-feeling spot, hailed as Ireland’s only fjord and a wildly impressive place all round. It had always appealed to me from photos and it certainly didn’t disappoint.Ahead was the mountain wall of Mweelrea which must give sensational views from its summit.

Lots of walking to be had around the fjord itself too. Apparently there is a school of resident dolphins and boat trips go out to (hopefully ) see them. I really would have loved more time around this area and regret also,  that we ran out of time to visit nearby Glassilaun beach. But time was getting on now and Chris had been driving most of the day plus we had a 2 hour + drive back to our base.It was already 5.30pm and Kylemore Abbey was the last place on our list of places to see.

Next time we visit Ireland, I really would love to spend a day or so here then head up into County Mayo. It all appealed a lot.

A stunning building on the shores of Pollacapall Lough, run by the Benedictine nuns.It’s not very old (late 19th century) but is quite a sight.It was closing at 6pm so we were pushing it to do any more than wander the first hundred metres of path by the lough and enjoy the mountainous, rugged surroundings, all set off with the serene waters of the lough.Another very beautiful part of Connemara.I did feel as if we’d stumbled now, across my very favourite part of this area but time was now definitely against us.

Back to The Burren and Bell Harbour

It was over 2 hours drive back on the R344 past the highly scenic Lough Inagh area with really splendid mountain scenery.

A long tiring trip, arriving back at our little cosy abode around 8pm – almost a 12 hour day – but one we are very pleased to have done especially in such gorgeous weather. Connemara was definitely one of the highlight areas of our week. In fact, along with Slea Head, Dingle, it was the loveliest of all the areas that we saw.