It was pretty much all over now, our 7 day whirl through some of America’s most superb National Parks.

As we left Grand Canyon, the weather gradually improved until the stormy, cold rain seemed a lifetime away.We were back in a sun-drenched landscape by the time we reached Williams, Arizona where I wanted to have a quick look at Bearzona. We’re not fans of zoos or wildlife parks as such but I really wanted to see bison and bears up close and it promised that.Paid our $40 (I think that was how much it was for both of us and the car) and began our drive through the open enclosures.Lots of warning signs about keeping the windows up in the wolf and bear enclosures and staff there to make sure you did.

I sort of thought it would be a case of glimpsing a bear or two lying down in the forest, quite far away.But in fact, the place was full of black bears! They were at the side of the road eating fruit,some wandered across in front of the car, some climbed trees.They were really large too – more like grizzly size.I always thought it wouldn’t be so bad meeting a black bear, you can face it down etc, it’s smaller and more fearful of humans (as we learned in Canada) but these were enormous. 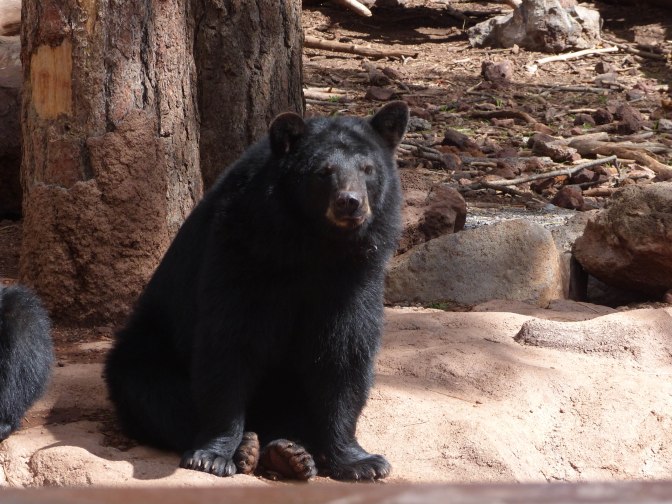 The a drive through the bison enclosure and we got close up to an impressive, prehistoric bull and several females.Plus a calf.

We stayed around briefly to catch the start of the Birds of prey display and were impressed to watch an Eagle Owl fly right over the heads of visitors.Saw a pair of otters though we see these a lot at home, in the wild. But we didn’t want to spend too much time here.Even a place as well done as this never leaves me feeling particularly great; the animals are still captive.They had a couple of Black Jaguars too, one of which was pacing her enclosure in that manic way typical of zoo animals.She was magnificent  -those pale yellow eyes! – but I felt very sorry for her.

Then headed on for a coffee stop at Kingman, on Route 66, the town where Clark Gable and Carole Lombard got married in a tiny church.We avoided the newer section of town and made for the traditional heart of it at Beale Street, an attractive up and coming area with a lot of very beautiful, historic buildings . I’d noticed a Wine Bar called Cellar Door, which I knew Chris would enjoy so we made for that.It was excellent and we chatted for a while to the friendly barman  – we were the first Scots he’d welcomed. Had a great Asparagus Dip and crackers and tried a Ginger Beer.

Then made for the Beale Street Brews cafe next door for a cake fix for me.Ordered a decaf latte and a (distinctly  average) cookie.Went for a stroll in the now-stifling desert heat , to see some of the cluster of historic buildings in the town which were very impressive.Saw the church where the famous Hollywood duo were married, the sort of thing which impresses me as I love the old movies. There was hardly a soul about, it was such a quiet place though at one point , a local businessman (with a Stetson! ) got out of his car and actually said “Howdy!” to us.I was thrilled and nearly said Howdy back. It’s funny how a combination of a number of really small  things add up to you really taking to a place. We also went into the Post Office only to be told by a customer that (Mary/Marnie?) had just gone out and would be back in 5 minutes.The customer seemed to be holding the fort. All in all, Kingman was a great wee stop and we would visit it again -maybe even stay overnight.We really liked the town.

Onwards to Hoover Dam and Lake Mead.There had been nothing spectacular about the countryside until we neared the Dam itself and the big raw mountains on either side drew our gaze. Had a quick look at the impressive Dam from the new O’Callaghan – Tillman Memorial Bridge, an amazing construction in itself.I can’t say I was attracted to Lake Mead itself.Too man-made and the desert heat was horrific here.Even walking across the Bridge in the strong wind,  was like being in a fan -oven.

It didn’t take long to reach Vegas after that.Excluding stops it had take us bang on 4 hours.It was surprisingly easy to navigate the motorway system too, even during Friday night’s 5.15pm rush hour, all the way in to Las Vegas Boulevard.We slowly crawled our way down the Boulevard itself, through endless traffic lights though going at this pace gave us a chance to sightsee a bit; the Little Wedding Chapel; the incredible hotels, pastiches of famous sights – the Pyramid, the Eiffel Tower, Bellagio, Excalibur (awful looking, like lego).They were impressive and beautifully landscaped.The streets was super clean too, full of big brand name shops, typical high street stuff . Just when we thought we’d cracked the drive in, we managed to miss the turn off to Caesar’s Palace and ended up having to rejoin the motorway,adding another 15 mins.

Finally got to the hotel’s self service parking ,which was very poorly signposted.No doubt it’s all to get you to pay for valet parking.

It was surreal walking through the lobby to register, having to go through the casino itself.Slot machines pinging, loud music playing, throngs of people, chattering voices –  overwhelming after the silence of the desert.Very quickly, our initial awe turned to weariness and Vegas and this albeit elegant and stunning hotel, seemed to symbolise the world gone mad.Everything was designed to winkle money out of you.
Our room, $185, was a corker though.Huge sofa and table, gi-normous bed, very classily done in an ultra modern, urban sort of way.Swish curtains and a truly great view from the 8th floor down to the 8 or so swimming pools with the desert beyond.It IS a stunning complex.Just take all the tacky slot machines and gaming tables away and I would have quite liked it for one night.

Opened some sparkling wine and drank to a wonderful trip.

But we were hungry now with about 20 restaurants to choose from.All of which turned out to have eye watering prices. I wish now we’d just bitten the bullet and paid for Mr Chow at $68 per head.The Beijing Noodle Bar’s prices weren’t so shocking so we ordered food to take away (the restaurant itself was full of plastic seating and tables which I don’t find appealing.We had a much nicer environment to eat in, in  our own room.)
The food took a LONG time to arrive and we scuttled back to our beautiful room with it, starving. Only to find that they’d given us the wrong order.It had taken us about 15 mins to walk back to the elevator and walk to the room itself in Octavia Tower.The distances are huge in the hotel – it’s like being in a small town in itself.We were actually in quite a remote part of the hotel (well, I HAD asked for a quiet room). Sure enough, a phone call confirmed that no, they didn’t deliver and yes, we’d have to go down and pick up the correct order.Groan.We were growly by now, ‘hangry’, and had already had a bit of a fall out over the whole food choice thing.I volunteered to go down and get it but Chris said he’d do it.The only good thing was, they told us to hold on to the order we already had so we ended up with a big portion of decent Spare Ribs as well as a Prawn Fried Rice.Plus our own Crispy Chicken(not good) and a pretty decent Chicken Chow Mein. All for $58 dollars ( good for this hotel) minus a $20 voucher which was part of the booking deal.

We were glad to head out of Vegas next morning,with just a short 30mins drive to McCarron Airport.To be honest, it was a waste of a day really.We spent a bit of time in the morning wandering the streets beside the hotel and into the Bellagio.Checked out the Roberto Cavalli and Dolce et Gabbana shops in the precinct.Beautifully done.But not real somehow – or not for us anyway.I did think we might have enjoyed the madness of it all for a short time, but we were happy to leave.A tick box though – at least we’ve seen Vegas.Would give it a miss next time though.

Flew out of McCarron, a pleasant airport, at 4.30pm and landed in lovely Long Beach an hour later.

Next stage…..LA  and the Big Sur coast to Carmel