The Pap of Glencoe – a famous landmark at the end of the glen, a rocky, knobbly little tower of a hill which promised spectacular views.In reality, it was a tough, relentless slog up an eroded track for  – yes, wonderful views  – but not one I would happily do again.BUT, it had been a wee bee in my bonnet every time we drove through Glencoe. I always looked up at it, not sure why I’d never attempted it.No difficulty as such, no exposure or anything scary, just HARD GRAFT. The hill’s Gaelic name is Sgorr na Ciche – the peak of the breast, hence the anglicisation to ‘The Pap.’ It’s not a huge hill, only just over 700m,  but it’s very distinctive.

So one sunny, warm July day, its siren call had me donning the shorts and walking boots and leaving home at the same time as Chris, when he left for work at 7.30am.
Two hours or so of driving later and I had pulled into the forestry car park a couple of miles beyond the Clachaig Hotel in Glencoe.

Oh the heat already at 9.30am! It was boiling – the worst weather for a mountain slog.Honestly, beyond 16C and any exterion has me over heating alarmingly.I must have true Northern blood.

There were others preparing for the walk, of which I was glad,  as I am getting bizarrely nervous about walking alone as the years roll by. Almost like the risk factor goes up, not regarding injury (which is more likely) but vulnerability as a lone female. I’m embarrassed to admit it, as I used to take off on my own with glee. Age, as ever, doesn’t come alone it seems.Yet our hills and glens must be amongst the safest places on earth in that respect.

So I set off, after the usual faff with packing gear and food (such as I had) and water and was pleased to notice that a family of four was already striding ahead on the forestry track.Glencoe is emerald green in July, as is much of Scotland. It’s not my favourite time of year colour-wise; I like the golden, tawny, orangey/amber colours of autumn and especially winter.And the clear blue sky made for quite a harsh light, not the best for atmosphere perhaps.But really who could complain (except me) about such a perfect summer’s day? It was a stunner.

Caught up with the family on the open ground when the excellent track ascended out of the trees and through a field of cattle. I had forgotten my carefully printed out map, a common occurrence these days and was now so busy squinting upwards to see the Pap itself and work out the route ahead, that I dropped my apple which nearly rolled into a cow pat, of which there were many. Fortunately I stopped it with the sole of my boot, nicely caked in the dried mud and other solids from previous walks. A quick rub of its skin and I reckoned any bacteria on it would take a half day to get to work,  so I’d get the walk in before the stomach pains began in earnest.

Had a quick chat with the family  – from deepest Yorkshire, another lovely part of the world – and they had map but couldn’t decipher it. Luckily I could and we all set off the right way at a fork in the track which would otherwise have been confusing.Such is Scottish hillwalking.Signposting? For wimps! Where it exists it’s at such a blinking obvious part of a route, it’s pointless. Where the route gets tricky – no such luck!

Ah well, that’s why you need a map. However, since the hill was directly above me it would have been a ridiculous scenario to get lost,  but as I like a good path, I wanted to make sure I got on the right one and didn’t end up hanging onto clumps of heather as I scrambled the (wrong) way up.

The path offered a tough angle of ascent, gravelly and broken and slippy,  but a path nonetheless and it meant height was gained very quickly.

The family with the two boys fell way behind but I was on a mission now and wanted to get onto the easier ground as soon as I could.Just below the hill there is a sort of plateau, which I was looking forward to reaching. It was no pleasure , that path,  but the views all around compensated a fair bit.

The heat was the thing! It was incredibly hot and that’s not something you experience too often on the hills in Scotland (thank goodness.) My God, it was boiling and, down here, windless – too hot even for midges.

It took me a good hour to reach the easier ground, a welcome relief. Ahead, I could see a choice of routes up onto the rocky dome of the Pap itself and a few tiny figures contouring the final slopes.Jeez, it looked steeper than I’d thought.

Stopped for a few minutes to get my breath and drink most of a bottle of fizzy water.Followed the path across the more gently angled ground,  then decided I’d take what looked like a shortcut onto the higher slopes to avoid a slightly vertiginous  -looking contouring section higher up. I’ll do anything to avoid a section that rattles my nerves a bit, exposure wise.

Anyway, somehow, that shortcut turned out to be anything but and was a pretty awful, ultra steep and unstable route up onto the final rocky knoll of the hill.

At one point, I noticed other walkers on the ‘sensible’ track, looking down askance at the ascending figure clambering over boulders below them. I smiled back, as you do, trying to look like I knew what I was doing and why hadn’t they chosen this great route? When I reached the main path again I was just relieved I’d made it up in one piece.

After that, it was only 5 minutes to the top, along a steep but good path, a little clambering but fine and with incredible views in every direction.It landed me on a beautiful, heather covered and surprisingly spacious summit.

There were only a handful of other people, all tucked out of the wind in little nooks amd crannies in the rocks; it was quite cold and blustery up here, despite the bright sunshine and blue skies.

It really was superb though – oh my goodness, mountains everywhere, the long , sinewy sea loch below, the distant summits of wild Ardnamurchan to the west.What a day to be up in the mountains, all the hard effort and huffing and puffing rewarded multiple times. 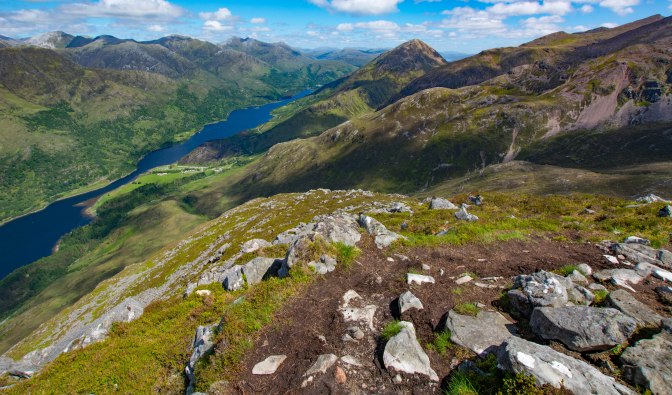 Found a sheltered spot and put a warm top on, then enjoyed some water and an apple and some chocolate tiffin I’d made.I’m never very hungry during a walk.It was a toughie but not long as such, less than two hours to this point so my energy levels should last ok.

I spent quite a time up there, even in the wind, twenty five minutes at least, it was just too hard to leave it all behind and head down again.But down I had to go. A glutton for punishment and overly concerned about that little ‘edge’ ahead,  I took the same shortcut route down, picking my way through the boulders and over the loose, steep gravel.Met a young couple coming up but the girl turned back, quite loudly remarking that she wasn’t happy with the ground and steepness.I also met the family I’d spoken to at the start  – about a quarter mile separating the guy from the woman as he forged ahead – and minus the boys.Very strange, but I found them halfway down the mountain, left playing beside a burn.Not sure I would have done that when my own two were young but they wouldn’t come to any harm.

Back at the car just over four hours after setting off, most of the cars now gone.A tough day on the hill, my legs would feel that one, but a good one to have ‘ticked off’….I’ll look at it now without feeling guilty at not making the effort to get onto its spectacular top.

Stopped off at The Clachaig Inn, the famous climbers pub and hotel at the end of Glencoe.

It’s in a fantastic situation and it was a joy to sit down at an outside table and rest my weary legs.Sitting in the hot sunshine, the hard work done and my mind filled with memorable views, a pot of tea never tasted so good.

3 thoughts on “The Pap of Glencoe”