There are many mountains called Ben More in Scotland, a name which means the Big Hill; Gaelic names are usually highly descriptive and it is indeed the highest point of very mountainous Mull. It is the only Munro on the island and has a height of 966m or 3,169 feet. However, choose a decent weather day as doing it in low cloud and mist is sort of pointless unless you just want to tick off a summit or get some good exercise in. I’ve managed to climb it in poor conditions several times (once could be said to be unfortunate, twice is  downright carelessness.) However on 1 January 2019 we celebrated New Year’s Day on the summit of this fine mountain under mostly sunny skies. The views were breath-taking (as was the ascent).

I do love the island of Mull. It’s quieter and more remote in feel than Skye, far less populated with some stunning corners and vistas. Not quite as dramatic overall as Eilean a Cheo – few places are – but it in many ways is more beautiful, in my opinion anyway. Wildlife is better on Mull than on Skye, one reason being that the coast is much more accessible so otter spotting, to name one key species, is easier.

After two days of gloomy weather with a fair bit of rain, the forecast for the 1st day of 2019 promised much brighter weather. Daylight hours are short in January; it gets dark around 4.30pm on the island and doesn’t get light until well after 8am. We set off at 9.15am from our holiday cottage on the Ross of Mull, driving for an hour (a beautiful drive) to reach the start of the walk and the parking area beside Loch na Keal at an area known as Dheiseig. There were around 8 cars there already – the hill was busy!

We set off on the excellent track up to Dheiseig Cottage, where I saw a rusty wee half broken sign which read , when I peered at it for a while, ‘UP.’ Ok, we were on the right route! Up we went on a grassy path, over a low fence, then along a boggy but decent path, very wide and obvious as it traversed above a burn which tumbled in an occasional waterfall down the mountainside. It was quite a gentle ascent leading to a crossing point where we hopped over the small river easily on boulders.

At this point, we’d been walking gradually uphill for 40 mins and Chris took this moment to check where we were on the OS map of the route he’d downloaded onto his phone.Then I got the bad news –  we’d only climbed 200m.What??!Groan. The hardest work still lay ahead 😦

There are multiple points to cross the river/burn, none difficult but we now very quickly were on a very wet section.Thank goodness for good boots! This fairly quickly became a bit rockier as the track climbed more steeply, but it was always easy, winding its way up the moorland. Ahead, slightly worryingly, mist was wreathing the summit and my heart sank; not another forecast that was wrong, surely? The cloud was supposed to have lifted by now. I silently cursed our Mountain Weather Information Service, which is mostly a boon but also depressingly TOO often, the bane of many a hill walkers life,  luring us out onto the mountains with the promise of clear summits only to find they are heavily wrapped in low cloud and mist –  The Clag as it is known.

A chap from Liverpool caught us up and we chatted for a bit. He’d been living for a few days in a small campervan which he’d parked above Tobermory on Hogmanay, hoping to get an early night and a decent night’s sleep before his big walk today. Unfortunately, he’d parked right beside where the midnight fireworks were set off, waking him literally with an almighty bang (or twenty.)

He pushed on and we had a breather on a rock before the final hike up the summit cone to the top. We’d been slogging away now for around 90 mins and were at the 600m contour. Not far to go!  No hanging about for too long however as the wind was bitter and buffeted us mercilessly.With wind chill at this point, Chris reckoned it was -10C.

The final third of the climb was the steepest and needed a bit of huff and puff. But as if by a miracle,  the mist had now cleared and the views out over the surrounding landscape were wonderful.

Spurred on by the knowledge that summit vistas would be our reward, we ploughed up the zig zagging path, breathing heavily.

Then suddenly the angle eased and we were on the flatter summit ridge. Wow – the dramatic cone of A’Cioch reared to the side, a much more difficult ascent route and it looked terrific.

Behind its impressive contours were layer upon layer of the big rounded hills, bare and ancient,  which lie at the very heart of Mull. A tiny slice of wild Loch Ba, the haunt of sea eagles,  was just visible, a place we have often camped. Behind us lay Loch na Keal (loch of the church) and its islands – Eorsa and Ulva and Gometra, old, old names. The open ocean lay beyond though low cloud and haze was hiding Coll and Rum and Skye. What a wonderful place to be on the first day of the year. I really don’t like Hogmanay and prefer it to be over quickly, finding it quite a sad and slightly depressing time; but New Year’s Day always seems like a fresh start, promising new adventures.It is one of my favourite days. Eating into it by staying up half the night then spending its precious hours of daylight recovering in bed or lounging about indoors, just seems a complete waste (even as a teenager I was not much of a party animal; a ‘queer wee stick’ if ever there was one.)

There was still some low cloud about but it didn’t last long….

There is something about a hill walk that is so satisfying, so life affirming, that it becomes addictive, like a drug. 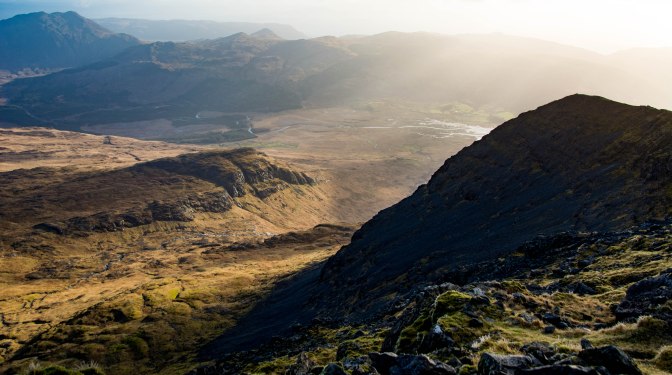 It had taken us 2hrs 15 to the summit (10.15am – 12.30pm) , including several little stops and a lot of photo taking on the ridge itself. It was a good 45 minutes later at 1.25pm before we began to make a move to descend. Incredibly, there was no wind at the summit. This frequently happens! The little cluster of other walkers that we’d said  Happy New Year to, didn’t hang around long so we soon had the place to ourselves. Spicy chicken sandwiches and boiling hot Minestrone soup from the flask never tasted so good! But leave we eventually had to as it would not be a good idea to drive that road back to the cottage in the dark. Too high a chance of colliding with red deer or sheep. Getting the journey over while it was still daylight was now the priority, as well as enjoying the blue sea loch below us, the islands and the winter sun on the now golden moorland.

5 hours after setting off, we were back at the car and came upon a wildlife watching mini-bus parked beside us. I asked one lady how they’d got on. ‘Brilliant!’ she said. ’Sea eagles and golden eagles everywhere we went, otters all over the place…..’ Happy people, having a cup of tea by the loch side, talking excitedly about their day as we got our boots off and the gear into the car.

I often see questions on the TripAdvisor Scottish Forum about whether there is any point in a winter break in the highlands and islands, is it worth it etc. And I see answers sometimes from people who I can only assume have never ventured in winter up north or west, never left their city or even ventured north of the Border – ‘oh no, days are too short, too cold, too wet, too…whatever.’ But these wild places are utterly rewarding and inspiring all year round, their beauty and interest rarely diminished. The 20 or so people we met that fine day I think would agree.