It was our last day in Torridon. Unfortunately, the 80mph summit winds which had raged during our 4 short days in this most stunning of places, was playing havoc with our hillwalking plans!

I’d wanted to climb Beinn Damh (pron. dav) for years but the fates were always against it. And so it was proving once again. The Shipping Forecast the night before didn’t suggest it would calm down any time soon either. The Mountain of the Stag as it translates from the Gaelic – even its name thrilled me – was not to be.

But as we lay in bed that morning enjoying a cup of tea , I noticed the wind that had howled against the windows of our cottage each day had stopped and the sky, just after first light , was crystal clear.A quick tune in to the Outdoor Conditions forecast at 8am promised a fine day with light winds! What on earth…….even the shipping forecast was wrong! We slurped down the last of the tea, threw on the walking gear, got the flask and some food stuffed into rucksacks and by 9am we were driving along the shore of beautiful Loch Torridon towards the start of the Beinn Damh walk.

I couldn’t quite believe we were here, as we headed up the beautiful forest track lined with ancient Scots Pines.

Torridon in November takes on the colour of the Sossusvlei sand dunes, other world pink/apricot  – coloured pyramids which we have been privileged to see on a week’s driving tour of Namibia. When the sun lights up the mountain slopes in Torridon, the amber, gold and tawny slopes look on fire. I have never seen such country anywhere to compare in colour with the North West Highlands. The Tolkeinesque Lofoten Islands in Norway turn such colours and look amazing,  but do not have the sheer variety of vegetation as a contrast. Whatever, it’s totally magical and almost unreal. 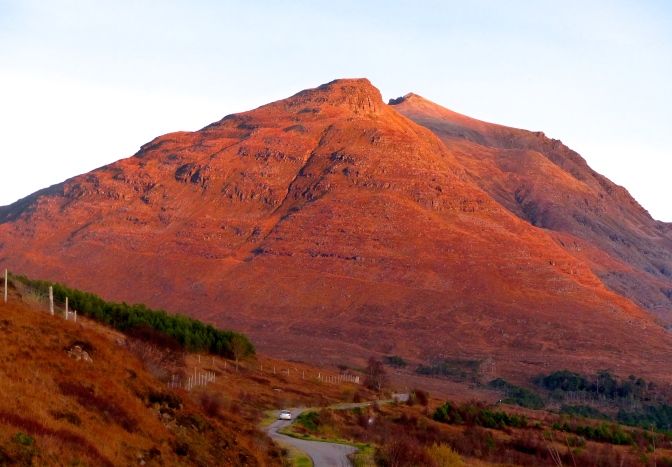 The excellent path, almost cobbled at times, continued once we were out on the open moorland.

The air was sweet and fresh, not a breeze stirred; it was hard to imagine it was mid-November.  We stopped so often to take in the magnificence of it all, it was 1.5hrs later – 10.45am – before we reached the top of the saddle and arrived on the ridge itself.

The main ridge of the mountain reared ahead of us to the east,  narrower than I’d thought from the book description. (my ‘wee feartie’ angst kicked in). But forgetting what might lie ahead, it was time to drink in the scene. The Trotternish Ridge on Skye, the North Harris hills, Lewis and the deep blue Sea of the Hebrides. The giants of Torridon opposite, with Liathach and Beinn Eighe looking most impressive of all. It was mesmerising.

To the south, Blaven and Beinn Bhan (what a great looking mountain) , the Small Isles of Eigg, Rum and …was that Coll too, another of the Inner Hebrides? It was!

It was another 1.5miles from the saddle to the final summit.We chose not to take the bypass path but to carry on up the ridge to the first summit, it was just such a glorious outlook. The narrow bit I was dreading turned out to be nothing of the sort, plenty room. And the views, if it were possible, just got better all the time.

The final broken quartzite boulder slope to the first summit was awkward underfoot but no problem as such.

The rocks were pretty stable and sometimes a wee boulder hop at least lets you gain height quite quickly. The absolute calm was astonishing.That’s so often the way of it – it blows a hoolie for a couple of days then a cracker of a day dawns.

We caught our breath at the summit and I can only say, the view was a jaw drop.

South Uist was visible now beyond the jagged peaks of the Cuillin, always a joy to see. But possibly most astonishing of all was the view east and south. Being Damh’s final summit ridge sweeps round to Spidean Coire an Laoigh giving us views down into the impressively precipitous northern Corrie of the Warriors/or Calves – Coire an Laoigh – which lay in deep dark shadow. Beyond, Meall Chean – Dearg and the peaks of the Coulin Forest looked almost primeval, bathed in sunshine. A sea of peaks and wild country lay before us , the clarity and light unequalled in my experience. It was already one the finest views I have seen from any summit. Chris, a man of few words,  was chattering nineteen to the dozen about future wild camps, pitching on the saddle or even up here, to catch the sunrise and sunset.It’s a dead giveaway that he is seriously impressed and very, very happy!

One of my favourite mountains – Beinn Alligin – looked like an enormous but beautiful volcano from the Jurassic era. 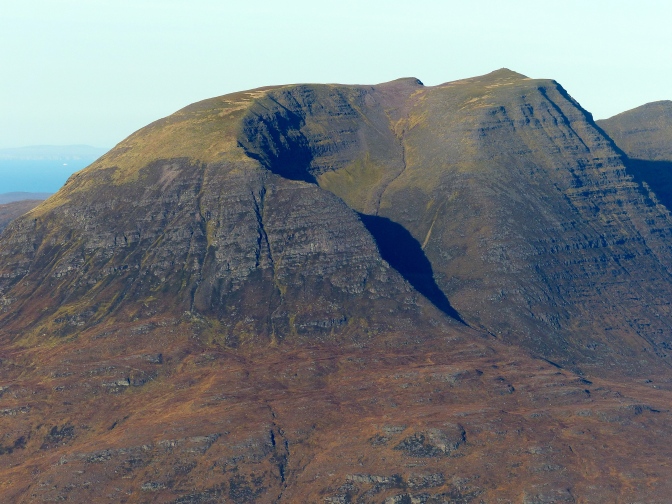 We dropped down on less bouldery slopes though still quite rough and picked up the bypass path for the final ridge walk to the main summit.

What a view as we made our way round the corrie headwall!

There was a small ascent again and I scrambled a little to the right to avoid the gravelly path which teetered a bit too close to the chasm at one point. Then it was a short stroll to the final summit. We’d made it! Oh that feeling when you know you’ve done it and that you are surrounded by some of the most spectacular scenery in the world. We both agreed that compared to some albeit minor hiking we’d done last year in the Rockies, this was even more beautiful. I think it’s the ancient quality of our mountains, with some of the oldest rock in the world exposed. And the sea and loch interplay, plus the incredible colour and light. It’s a killer combo.

A couple behind us arrived and we chatted briefly about what a brilliant day it was. Everyone is always so happy on a hill….well, in good weather anyway! 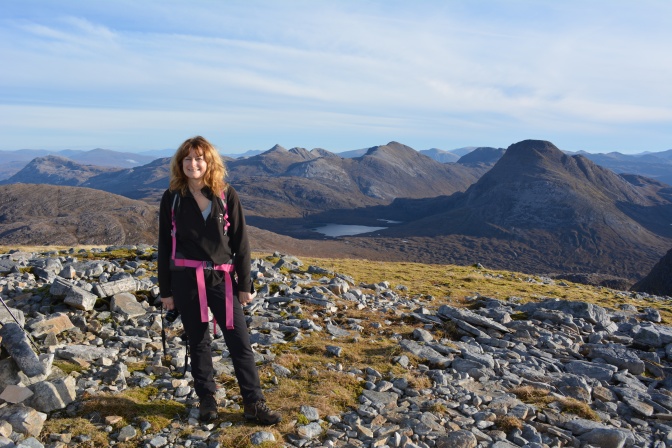 With the wonders of phones nowadays I sent off a photo to my two sons back in civilization and to my ‘wee’ brother, a one time Munro Bagger who hung up his boots when the family arrived and has proven very difficult to entice back. I always hope a pic or text might do the trick. I used to call my Dad if possible from each summit and knew I’d get the same response of ‘what the heck are you doing up there? Get down immediately!’ It was a wee joke between us; he loved these missives from the mountains. That mild scold is, three years after he died, still a big miss. 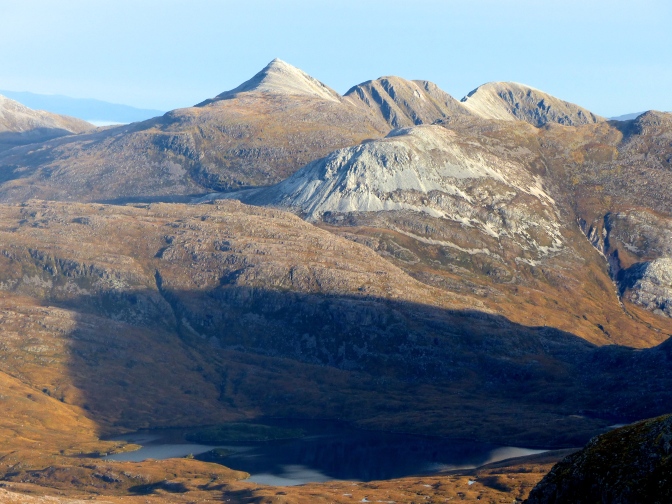 Knorr’s Chicken Noodle soup and a cold lamb sandwich to fuel us up a bit ,though I’m never very hungry on a hill walk. Nerves maybe? Adrenalin?

It’s always hard to leave the heights especially on such a day but descend we had to.

As we headed down the steepish initial section of the track below the saddle, the mountain lived up to its name as a large red deer stag was etched in silhouette on the edge of the mid slope. Below, a herd of stags grazed unperturbed by our movements.

We reached the car at 3.15…six hours after leaving it.It was a day I’ve never forgotten.

And the drama wasn’t quite over because the sun was now dropping low in this autmn/early winter mid-afternoon,  lighting up the slopes of Torridon’s shapely mountains.

Then it was a quick drive up the Inveralligin road to catch the last hour or so of good light as the sky turned all shades of pastel blue and yellow and pink.Beinn Damh wa snow silhouetted in all its glory across the loch.

Finally, an obligatory visit to the excellent Torridon Stores and Café.Now the appetite kicked in big style and it was some Iced Ginger Flapjack for me (500 calories worth – ouch) , wine and a cheese scone for Chris . At last, a tea room (my choice) which serves alcohol (C’s choice).Both happy.

A grand finale to our little escape to wild Torridon, saving the very best for last.