The Outer Hebrides (Western Isles) are amongst my favourite of all places anywhere in the world to walk and hike. Very little effort tends to bring superb rewards of moor, mountain, ocean and lochs with even a golden eagle or two thrown in. For lovers of wild places, these islands are unbeatable. We spent a week in October 2018 enjoying their beauty and luckily, were blessed with good weather, albeit there was always a strong wind. Such is life out on the edge of the North Atlantic!

The north end of Berneray is my favourite part of this tiny island with stunning shell sands on each side of the promontory, only a few houses and fine views of Harris rising from a jade green sea.Arriving off the ferry from Harris, we drove in sunshine and showers through the surprisingly populated village itself, beyond the Gatliff hostel.Seals basked on the rocks, big Atlantic Greys, enjoying low tide.

Past a small lochan, on we went for a few minutes more to the very end of the public road where we knew there would be access onto Beinn Shleibh, Berneray’s tiny highest point at less than 100m. No parking at Sandhill Farm itself, so we retraced our route a few hundred metres until we saw tyre tracks leading onto a flat grassy area behind the east beach.

5 minutes walk along the single track road led us to a gate and an obvious track winding its way uphill past grazing sheep.

A quick browse of an information board confirmed we were on the right route though you could hardly get lost round here (the walk is signposted.)

Up the track climbed beside an old graveyard, the stone walls covered in bright yellow lichen, almost merging into the moorland and becoming one with it.

It was a very easy ascent (if you are used to hills) with only minor huffing and puffing and in 25 minutes or so we were at the Trig point and summit. It is a lowly hill, Beinn Shleibhe, yet the vista it provides is life affirming in its beauty.

On a sunny day, the glacial green/turquoise of the shallow Sound of Harris was mesmerising, with the dark blue mountains of Harris itself rising in shapely forms on the northern horizon. Emerald green Pabbay, uninhabited but used for sheep grazing in summer, lay to the west and we could just – just- make out the familiar outline of St Kilda 45 miles west on the far horizon. North Uist’s low hills and white sand beaches were in rain shadow to the south. Skye’s impressive cliff headlands and the unmistakable shape of the Cuillin ridge, reared out of the ocean to the east.

Hebridean air in summer is like no other but although the machair flowers had long gone, the colours of autumn were stunning , with the wind whipped clouds casting fast moving shadows across the land. For anyone with an interest in photography, the light was ever-changing. 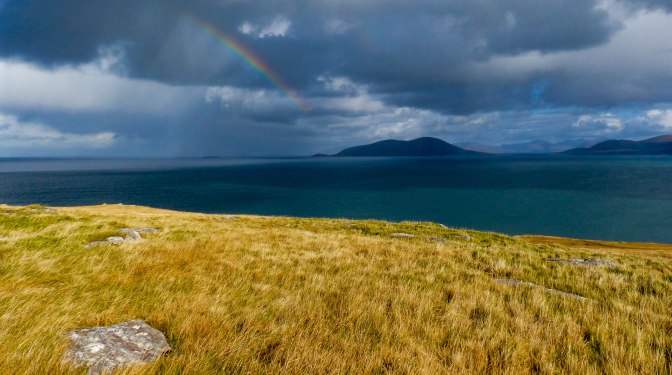 That wind was a killer however and we had to dip down the other side of the hill to get some shelter from it. The relief as we found some, in order to sit and enjoy some sandwiches and fruit and admire the sparkling scene all around us. As ever it was very difficult to leave that quiet little grassy perch but Berneray’s glorious, deserted shell sand beaches were a lure. As we descended, a dark brown bird of prey swept across the hillside ahead of us, before sweeping down over the machair lands behind the dunes. The flash of her white tail made her easy to identify – a female Hen Harrier on the hunt, always a thrill to see!

Various tracks with wooden posts indicate the way but you could make your way off the hill any which way really, it’s all very benign and grassy. In 15 minutes we were threading our way through the marram grasses of the dunes and onto the firm white sands of the beach.

It was a breathtakingly beautiful spot, with crashing surf and little Ringed Plovers scuttling about, feeding at the water line. The flock took off as we approached, fluttering this way and that , their high pitched piping calls so evocative of the Hebrides. 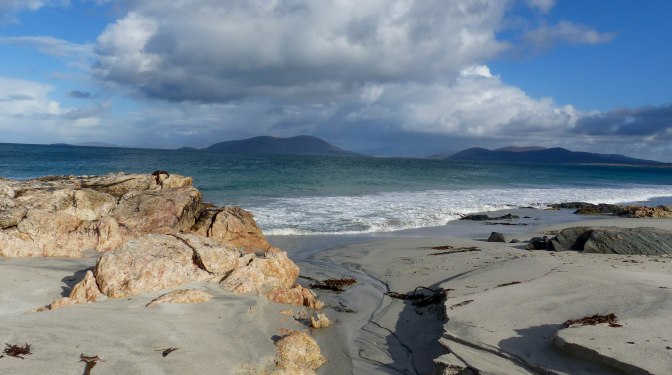 I often think Scotland must be one of the most colourful countries in the world, especially in autumn and winter and under scudding clouds. Thankfully, the worst of the showers had moved well to the east, missing us completely. We made our way close to the surf line, dodging the waves occasionally and delighted at the sunny weather. It’s a case of picking the best spot for leaving the beach and finding one of many grass tracks which lead across the machair and back to the public road again.Many Blockhouses are now being converted into holiday properties, blending in to the rocky landscape by the shore.

Wintering Greylag geese (having come south to escape the Arctic winter) watched us warily as we approached their feeding ground, honking noisily but evocatively as they finally decided they didn’t like the look of us and took off; geese are always easily spooked. More silently, a skein of snow-white Whooper swans rose elegantly in a long line , rising from the lochan they were feeding on, before landing at its far side, also a little unnerved by our presence. Enjoying wildlife on a walk is such an important part of it all for me, especially having spent 15 days in the spectacular but very barren High Arctic. Here, the landscape was equally affecting and beautiful , but alive.

It would be very easy to make this walk 5 or 6 miles or longer by walking along the glorious deserted white sands which stretch for 3 miles on the island’s west coast. A big favourite apparently of Prince Charles.

Once back at the car, we couldn’t resist a stroll along the east coast beach and a quick look at the pretty Gatliff Hostel , a converted Blackhouse of thick whitewashed walls and a thatched roof, in a fine position sitting right above the shore. It’s always left open and anyone can book it, so we took a look inside. It was very attractively but simply fitted out with kitchen and common room and small bedrooms with bunkbeds. Very clean and with the fire lit at night, extremely cosy I’d imagine!

However, our own holiday house – Taigh Dobhrain (otter house) – on lovely North Uist now awaited across the causeway, so it was goodbye to Berneray. We both agreed that a bucket list item for next summer, was to enjoy a camp up on that beautiful little hilltop, as fine a situation as lovers of wild places could wish for.

6 thoughts on “A Walk on Beautiful Berneray”