This walk began as an 90 min easy stroll we’d done before,  to over 3 hours of at times tough walking! My best laid plans…it all began to feel like our walk yesterday at the Mull of Oa.But it was great overall, really worth while being high on the moorland looking over this beautiful bay.And the heather looked gorgeous.

From Kilchoman beach car park, we headed down through the dunes, to the lovely 2km sands themselves. They are usually pounded by heavy surf , a great walk on a breezy day, but the ocean was incredibly calm today.We made left for the beach’s southern end where a small summits wettish but obvious track winds its way easily below and round the back of the crags and up onto the top of the small hill with the radio transmitters. As we climbed, the views improved all the time, revealing a rugged coastline, lapped today by a benign, turquoise Atlantic Ocean.It all looked so beautiful.

In 40 mins or so of ambling along, we were heading up the final grassy slopes, past a herd of Highland cattle, arriving on the surprisingly large hill top area, with its rather ugly cluster of Radio Transmitters and old war – time lookouts.But it’s still well worth getting up there for the sweeping views over the sea, the sands and the emerald grasslands. I’d made up cold meat and coleslaw sandwiches whose time had now come, demolishing them as we sat on some flat rocks enjoying the vista.It was magical to be up here again after a 10 year gap. 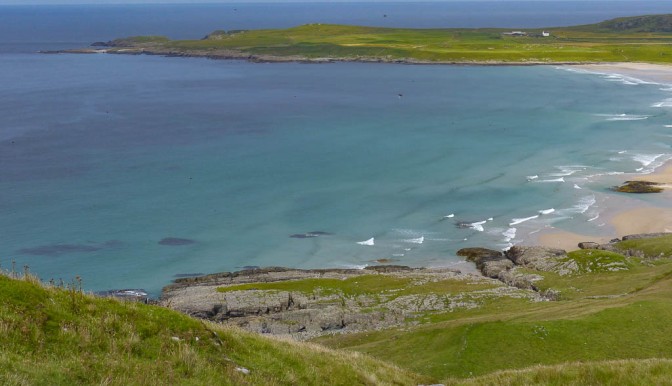 The tongue twister small hill I was already eyeing up north across the moorland from us was Turnaichaidh Hill,  a separate 2-3 hour walk from the car park featured on Walkhighlands.Why not cut across country and do that one too? It didn’t look too far, a few kms – two walks for the price of one? It would also be an alternative way back to the car park.

Another good idea which turned out to be a sort of Hell on Earth for the next 45 mins!

We set off on good grassy ground(this’ll be easy peasy I remember thinking) , dipped down a bit to a gate (always a good sign when there’s a gate) then began traversing upwards across quite different and pretty awful terrain. Knee high heather , hip high bracken and dense bushes and long grasses covered the moorland, with not a path or even a sheep track in sight.Exhausting, as we had to keep lifting our feet really high to wade through it all.

I dreaded how many Ticks Chris would have once we finished – he already has Lyme disease!  The heat had really built up inland and we were soon sweating buckets.But push on we did – one minute ascending a surprisingly steep little bluff that appeared out of nowhere, the next negotiating a short steep slope, clutching at heather to avoid slithering down on my backside.Then UP again.And our objective didn’t seem to get any nearer! No wonder there is no suggestion to traverse between these two low hills – it’s rough, tough terrain.

BUT – it was short and in 45 mins the summit finally came into view, another Trig Point and with nice flat rocks to sit on.The heather in August is glorious too – what a colour! From a distance, the hills and higher ground are cloaked in a purple/pink haze.Closer up, it’s just the most gorgeous sight (though not so easy to walk through for any length of time!)

Superb views over Kilchoman bay again, with the ancient Church now in sight.The handsome Paps of Jura appeared across golden and heather-tinged moorland.

The Mull of Oa was visible too, scene of yesterday’s surprisingly tough little walk.Drank a lot of water – there was barely a breeze, unusual for the islands.I was very glad we had a nice B&B to check into this afternoon to get a shower and freshen up.Plus, a nice dinner out in Port Charlotte, venue still to be decided. 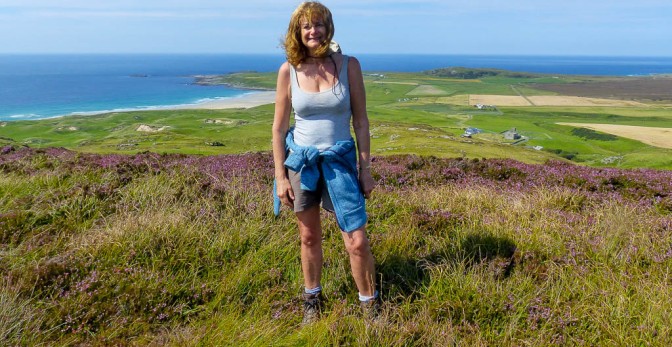 ‘How many ticks have you got?” I asked Chris, who was checking his legs.I was amazed when he said ‘none.’ Then  ‘….but it doesn’t matter anyway , I’ve got the disease, if it doesn’t put them off, what more harm can they do?’  Hmmm…not sure about that logic but difficult to argue against it!
Getting down off that small hill was slightly awkward too – there were small crags below us so we kept well to the left but the tussocky ground was littered with holes and hidden burns and needed a bit of time taken on it. 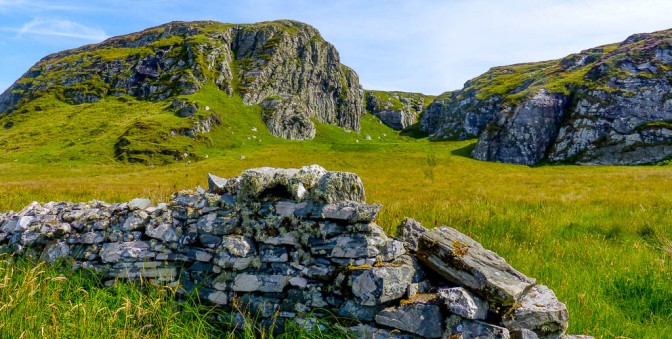 But not for long and in 20 mins we were down and on better ground, making for a gate and crossing boggier ground to visit Kilchoman War Cemetery.

What a beautiful place – on short cropped grass, on a small hillock overlooking the Atlantic Ocean, immaculately kept, the base of each headstone planted with local flowers. A silent, beautiful final resting place for some of the men of the ‘Otranto’ troopship which went down off Kilchoman in 1918.We were both deeply moved by it.

The walk had taken us just over 3 hours by the time we got back to the car.I wish we’d called in to Kilchoman Church nearby, which we’d visited before, where there is a fine Celtic Cross and an unusual stone that childless married women used to go to, believing it had strange powers which increased their chance of falling pregnant.But Kilchoman Distillery’s cafe drew us on and the great reward of a walk – tea and cakes!