Culloden House Hotel was one of these famous historic houses that I really wanted to stay in.Glen Affric was calling which I knew was near by (it wasn’t) and Fort George was somewhere I had always wanted to visit, so we started scouring the internet for deals.The ‘5pm’ site here in the UK is excellent at discounted deals on hotels and restaurants but it was through checking Booking.Com that I noticed the hotel was offering a good £126 price per room, with full cooked breakfast off season.Too good to miss!

I had tutoring work till late on the Friday afternoon,  so we set the alarm for stupid o’clock (5.20am)  on Saturday 29th January  to make the most of the day.It’s a recipe always for a poor night’s sleep for me and I’ve got used to feeling like a half-shut knife when Chris brings me a reviving cup of tea when the alarm goes off. I rarely sleep well before a trip, always feeling a sort of low level anxiety that makes it near impossible to slip over into slumber. Chris sleeps like a baby every time and is usually , annoyingly,  chirpy and up beat come morning.

It would be worth it,  I kept telling myself, hugging my favourite china tea -cup, enjoying being snuggled up in bed with a cuppa.Outside, it was dark, zero degrees with wind chill making it feel like -5. Not the best conditions to help you rise and shine and get going.

But by 6.15am we had packed up and were off, headed for the M80 and Stirling from our home on the south side of Glasgow.Roads were nice and quiet, Patsy Cline was singing ‘Crazy’ through the speakers and life  – by now  – felt good. Light rain dotted the windscreen, a mizzle as we would call it (is there any other country with more words which mean ‘rain’ than Scotland?).Nothing too serious though.

Past magnificent Stirling Castle glowering on its high rocky hill  above the plain.Then we swept past Aucherarder and Gleneagles before we reached the busy Broxden roundabout at Perth.It’s not the most scenic of drives , nothing compared to the west coast and the Loch Lomond road but it has its charms.Dunkeld is a pretty wee place with a fine old cathedral by the silvery Tay river and Pitlochry is a lively, attractive place too.But it was Harrods of the North – the House of Bruar – which drew us for our first stop.A cornucopia of shopping delights from Harris Tweed and pink cordurouy trousers to furs, posh wellington boots and Barbour jackets.The sort of clothing the upper classes think they should wear (actually DO wear) whilst ‘up north.’ All at eye-wateringly steep prices.But it is such a beautiful shopping complex and the Food Hall is a delight.Plus, Chris has a wee ritual where he always buys me Charbonnel and Walker Champagne Milk Truffles.They cost a small fortune but are gorgeous. So who was I to say  ‘let’s just press on?” Ah well, another few centimetres added on to the spare tyre.

We ploughed on to Inverness, reaching it around 9.35am.Fort George didn’t open till 10 so it was time to check out Culloden House Hotel and have a coffee break there.

It’s quite a building.Classically elegant, built in 1788, not the original house, it is a stunner to arrive at. Inside, it wasn’t quite as opulent as I imagined, a bit spartan but still charming.Inverness and its suburbs aren’t the loveliest places to be and the hotel is slap bang in the middle of housing estates and traffic.It’s ringed by grass and woodland but is not quite in the sort of rural spot it once occupied.

But it was still lovely to be here and oh,  it was nice to get a pot of tea, with nice china cups (tea somehow tastes better in them) and some very good homemade shortbread all served in the large sitting room beside a cosy fire.In the entrance hall there was a framed piece of plaid, the very fabric which had adorned Bonnie Prince Charlie’s bed on the night he slept in the original Culloden House before the battle itself. 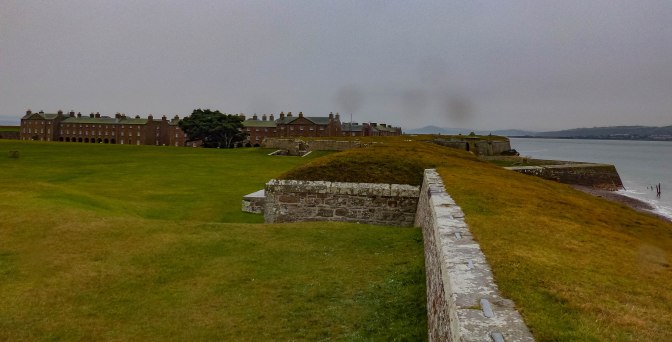 Fort George was only 15 minutes away, beyond the airport.It was a grey day with low mist and rain casting a fairly gloomy light over the Moray Firth.Kept a lookout for dolphins but was sure they moved further out by Spey Bay and Nairn in winter(they had).
Built after Culloden to defend against any further Jacobite invasion, the Fort is still used as a barracks.It’s quite a structure, beautifully built but never was a gun fired in anger from it.There is a lovely church at the far end and the names of the war dead of the Queen’s Own Cameron Highlanders are listed in two Remembrance Books . I took a photo of the names of my two Great Uncles – John and Murdo Maclellan – who died in 1915 and 1918 respectively.They were pipers in the First World War. I can’t imagine the pain of my Great Great Grandparents living in Grimsay, North Uist, coping with the death of two sons in their early twenties. 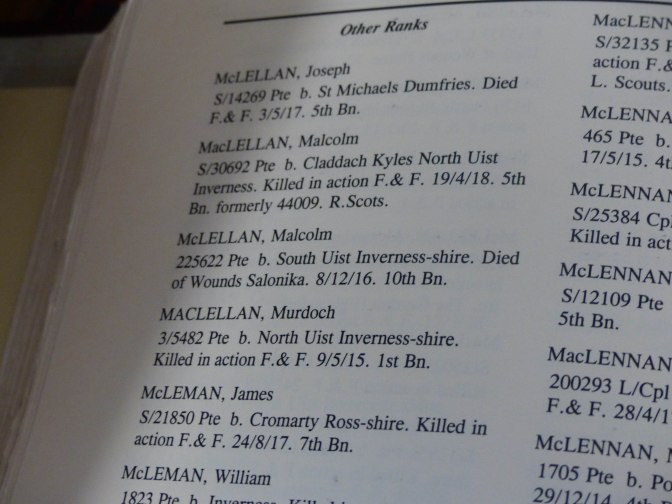 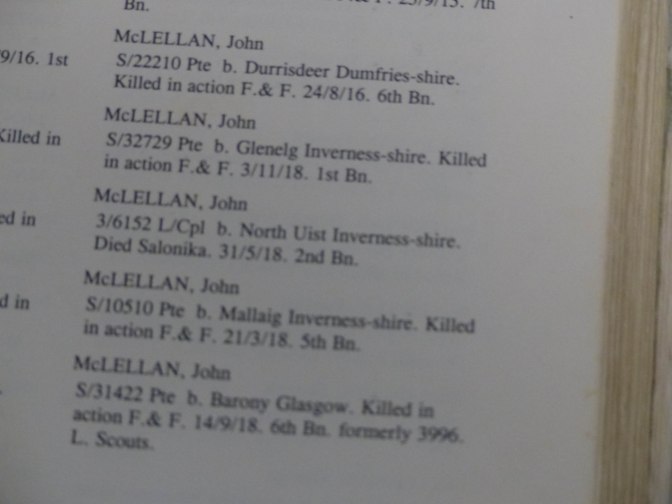 I have seen their names listed under their regiment in the National War Memorial in Edinburgh Castle and always find it deeply emotional, very distressing, despite having never known them.A sense of family connection, blood ties, seems to stay so strong down through the ages.In this small church were many worn, ancient flags on display from battles fought in far flung fields around the world.This was the most interesting part of the complex for me.

The man in the entrance shop was quite a character.We were given a small tot of Benromach whisky to try, a very nice gesture and had a good chat with him.But it was a miniature of an 18 year old Bowmore which caught my eye as a memento at £9 (beautiful stuff it was too.)

The forecast was for the cloud to lift so Glen Affric called.Through busy Inverness we drove, then down part of Loch Ness, none of it terribly inspiring.Then towards Cannich until the landscape perked up at Loch Beinn a Mheadhoin (ben ah vane – the middle loch).   Here, beautiful Scots Pine woodland lined the dark waters.The road was single track now and very winding and as we drove into the car park at the road end at Loch Affric, we realised it had taken us 1 hour and 20 mins to get here.Wow, a long way, much further than I’d thought.

There is a track right round the loch as well as long distance routes which start from here.We opted for the south side of the loch and set off to get some better views of the water.

However, the wide vehicle track kept well inland from the loch, very frustrating,  though the Caledonian pine forest was really gorgeous.The mountains came further into view as we strode out, Sgurr na Lapaich (the peak of the claw) being the most impressive.

After three miles we called a halt and had some water and crisps and a Picnic bar for me. 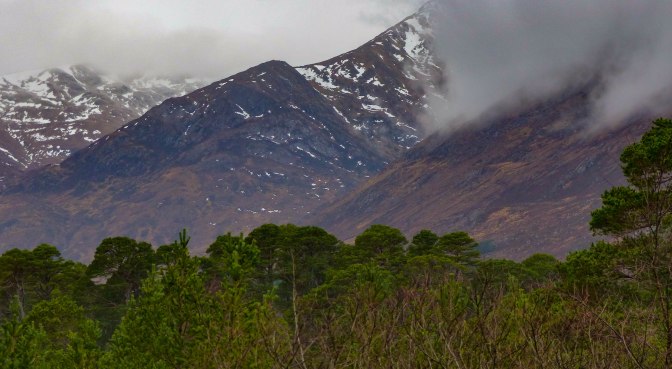 Took some photos and headed back.Six miles wasn’t too bad for the afternoon.When we got back to the car park, we  took five minutes to go up the viewpoint which gave the classic view of the whole length of the loch.

It was pleasant but not as impressive as I remembered. OK, weather was a bit gloomy but even taking that into account, Glen Torridon and the whole Torridon area knock it for six, I thought and Chris agreed.The Scots Pine forest is gorgeous of course and is the glen’s finest feature. I’m not sure it would draw me back anytime soon – too much elsewhere is better.But it was good to say a brief hello to it all again.

Culloden House hotel was a fine old house to come back to (a LONG 80 minutes later.) Our room was lovely….absolutely huge, a Classic Double, their cheapest but we’d had a minor upgrade which gave us a view over the rear grounds.For £63 each with a full cooked breakfast next morning, it was incredible value. 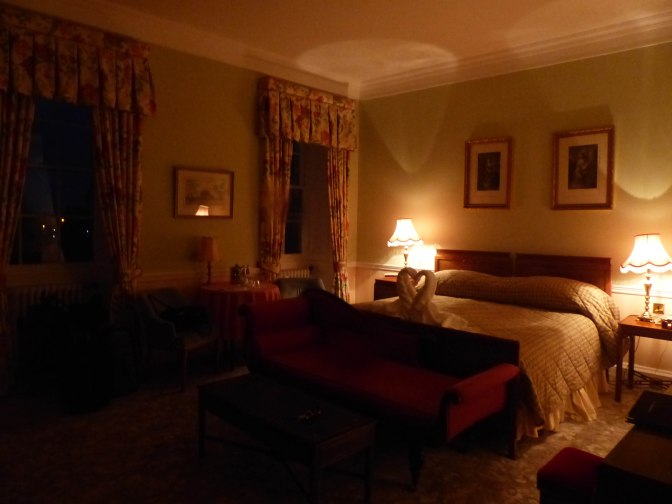 Popped open the  champagne (Aldi’s special at £10 a bottle) and drank to a lovely day and a great find in this historic hotel.Got showered and scrubbed up a bit for our dinner at 7pm.We were ready for it!

And overall,  a very good meal it was too.Excellent home made bread, two types. A beetroot, fine goats cheese and smoked salmon starter for me, while Chris had beautifully cooked scallops with crab mousse; beef fillet for Chris and lamb for me; unfortunately lamb which was spoiled in taste by a harsh garlic sauce of some kind.Everything else was delicious but that was a let down.Passionfruit dessert for me and a lemon posset offering for Chris.Chris’s wine was above average, a good Chardonnay with a powerful buttery flavour.He moved on to a glass of Rioja which came very cold, to the extent that they offered him another glass and didn’t charge for either.Very decent of them! The staff were very friendly and welcoming, particularly the two men. 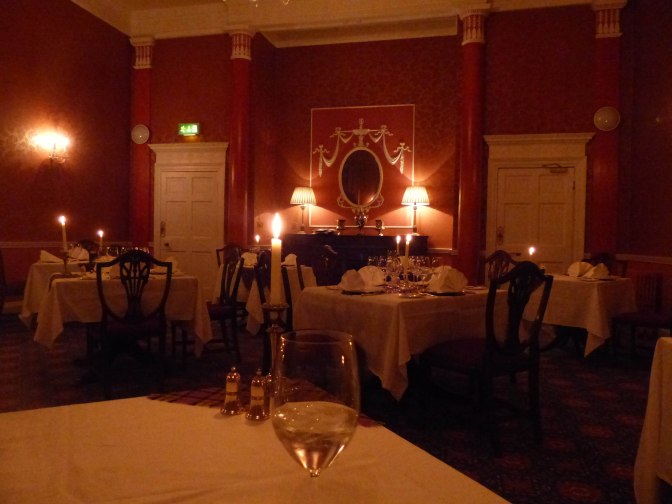 The girls in the dining room were perhaps a bit lacking in confidence which made them quite silent and formal, not relaxed.Then tea for me in the sitting room with excellent petit fours…homemade chocolates and good tablet.(Chris never moves on to tea or coffee, once started on the vino.) A really fine dining experience.We would go back for the food here.Good portions too.

A bit knackered by now , we headed off to the room and I zonked by 9.45am – it had been a long but very rewarding day.

Next day:Walking with Reindeer in Cairngorm

One thought on “Culloden House Hotel and Glen Affric”