This is a walk which to me, has better views overall than the more famous Lost Valley hike (which is still great),no scrambly stuff to do, more of a slog uphill but it never fails to impress the whole way. It takes walkers high above the famous glen, far from the madding crowd and where the A82 road is a thin pale ribbon winding its way through the grandeur.It’s a great way to really feel up in the mountains.It takes us anything from 1hr to Ihr 15 mins to MacMartin’s Top. Most of the route is on the West Highland Way so the track is good. It’s a walk we often do in in winter but it was lovely to escape the (unusual) August heat of the glen (28C!) and arrive in the cooler, fresher air of the mountains.

Not easy to find a parking place at 12noon on a Thursday in August, peak holiday season and during a run of superb, almost too hot weather! I don’t think my North Atlantic blood adapts easily to high twenties, humid temperatures! I’ve been in 40C in Europe or Southern Africa and felt less exhausted by it because the air is drier; ours is always dampish.

After a few attempts, we got a space at Altnafeadh, a popular stop off for photographers and the start of the climb up Buachaille Etive Mor. Some of the rough parking areas on the south side of Altnafeadh have collapsed completely and are not worth risking a car sump on!

To the south and west of this spot, lies the huge emptiness of Rannoch Moor, with a wild loneliness which I love.Dickens was moved by it too, albeit a little repelled by it perhaps!

“All the way, the road had been among moors and mountains with huge masses of rock … giving it the aspect of the burial place of a race of giants … anything so bleak and wild, and mighty in its loneliness, it is impossible to conceive”
– Charles Dickens (writing on Rannoch Moor)

From the parking spot we literally stepped straight onto the West Highland Way which headed up the moorland at a pleasant angle, before steepening into zig zags towards the highest point of The Devil’s Staircase, as this section is called.

Since the start of the walk is at 289m, there is only 260m or so of slog to the top of the Staircase itself where there is a large cairn.

Beyond this, another 150m of easy ascent on a rougher track – which can be boggy – leads to an even grander viewpoint,  a spectacular picnic spot.

Even stepping out of the car , the scenery is immense and would feel very wild if not for the A82 trunk road which speeds everyone through this famous Highland glen. There was an outcry when it was built and it does often seem to me that a fabulous place has been violated for convenience of our little metal boxes.

The track is wide and stony but good and usually quite busy.Very quickly,  the noise of the road was left behind and we entered a world of heather, a small rushing burn and  fragrant Highland air.

It’s impossible on the trek up, not to keep looking round to see how the view over the mountains is changing.Buachaille Etive Mor – the Great Shepherd of Etive – is a stunning, ancient pyramid of rock and moorland with tiny Altnafeadh cottage sitting below , a Climber’s Hut. The River Coe itself has the characteristic red/orange rocks   – red porphyry – of this area. In fact the glen is part of an ancient volcano, all that’s left being the Caldera.

Buachaille Etive Beag (the Little Shepherd of Etive) is a smaller pyramid and very emerald green in summer.

It took us longer in the heat to get to the Cairn, where people were stopping to take a breather and drink their fill of water – it was stiflingly hot with hardly a breeze – unusual in the mountains.

Now we had a better view of the Mamores, the shapely hills around Ben Nevis; the Ben itself was clearing of cloud , its great wedge -shaped summit easily recognisable.It also was once a volcano 400m years ago.Scotland’s mountains were once of Alpine even Himalayan height but being amongst the oldest in the world, have been worn down over the eons and honed into the ancient shapes of today.I sometimes wonder whether that is one reason Scotland is called ‘The Auld Country.’

Photographers often camp on its benign, wide slopes, in summer and winter, to capture sunrise and sunset over the mountains. It’s something I’d love to do sometime. For our winter walk up this great hill when it was heavily covered in snow and ice:

There is a lovely wee lochan below the Cairn at the top of the Staircase giving a nice foreground to the mountains. 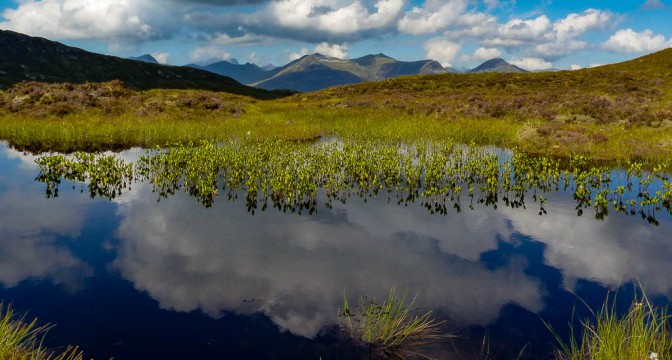 From here everyone was either heading on another few miles to Kinlochleven or returning to their car. But we headed off left on another more informal path but still obvious and which took us easily in 15 mins or so to Stob Mhic Mhartuinn.

Once higher above the Cairn, the Blackwater Reservoir came into view as did the vast emptiness of Rannoch Moor, with its scattering of lonely lochans.

I love the view over Glencoe from Macmartin’s Top. Lots of big flat rocks to sit comfortably on, as fine a place as could be wished for in wonder at Nature’s grandeur.

The deer grass was  already turning quite golden – by October and November it would be burnt orange, an almost unreal shade.

What a delight to be here at this spot with our eagle’s eye view over the Three Sisters and Bidean nam Bian! In fact on the return, an eagle’s eye was indeed surveying the scene- we watched a Golden Eagle soar over the ridge to our left,  before disappearing over the other side.Not an uncommon sight, to see a Goldie here.

My gaze kept turning towards Ben Nevis, the big summit clearing before the mist descended again. Would be a great day up there for the hundreds hiking the UK’s highest peak.

We spent 40 mins or so just enjoying the relative cool, drinking lots of water and appreciating a rest after the hot climb up. Always hard to leave a high vantage point but down we headed eventually with another rest at the Cairn before winding down the stony track and back to the car.

A terrific short walk – yes a bit of effort as any uphill walk is but worth it ten times over.

For so many visitors Glencoe is a mere photo stop at one of the crowded main car parks, a few minutes of gasping at it all before heading on. But it deserves so much more! This hike does a bit more justice to one of Scotland’s most celebrated areas.

Other brilliant walks to enjoy the area, though true hill walks are: