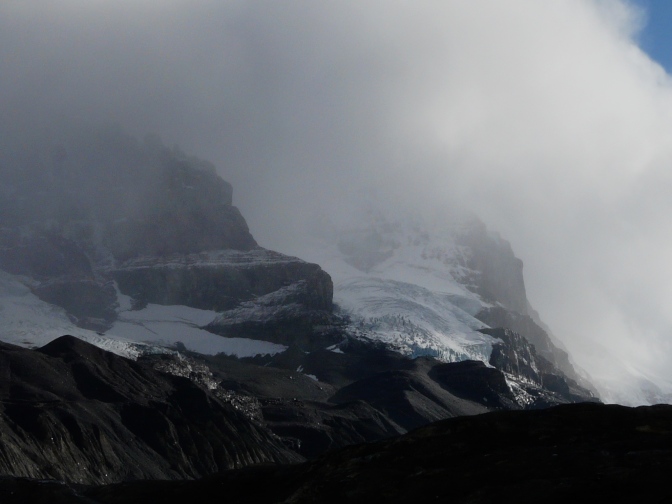 We wanted to enjoy what we could of the Icefields Parkway in daylight though it was about 3pm before we headed off from the Lake O’Hara car park.

It was a cloudy but brighter day as we headed north, the traffic getting noticeably quieter as we headed away from the Lake Louise area.

The scenery for the next 2 hours or so was superb – big, big mountains on either side, forested on the lower slopes, little habitation. We had a couple of stops just to take photos and it was a pleasure to drive on the empty sweeping highway. No wildlife to be seen though.

We stopped at the Athabasca Glacier in a bitter wind and with sleet falling and a strong headwind.Walked the 10 mins or so to the fencing nearest the glacier’s edge.It was a wild scene, very impressive.We hadn’t planned to do the glacier bus trip but we maybe should have; I thought this area was mightily impressive and getting safely onto the glacier would have been interesting,more so than I’d thought when reading about it.Never mind.Our main aim had been to walk either Parker Ridge and Wilcox Ridge but the weather was pretty wild and the cloud was down too. Maybe we’d manage one of them on the way back.

Arrived at Jasper around 5.30pm and decided to head into town before we made our way to Becker’s Roaring River Chalets which we’d passed on the outskirts.

Had a quick look around Jasper, liked it better than Banff, very open, not so big and busy, the mountains seemed further away.But I was glad we weren’t staying there.It was still too built up and nothing much appealed for eating out. I suppose the architecture wasn’t to our taste, modern and with a 1960/70s look about it, but we found an excellent little supermarket and got stocked up on goodies.

My heart sank a bit as we pulled in to Becker’s Roaring River Chalets.A chalet park after what we’d just had. But it had been difficult to get anything else in this area, unless it was a basement conversion in Jasper or a B&B, none of which we fancied. Plus, we did like the sound of being beside the mighty Athabasca River as it wound its way 200+miles to Hudson Bay.

In fact, the place was really well kept , with manicured grassy grounds and dotted with pine trees. And the river was 50 yards from our chalet, one of the end units away from the reception area and restaurant and road. Inside, our accommodation was plain and simple, quite old-fashioned but clean and quiet.We liked it. 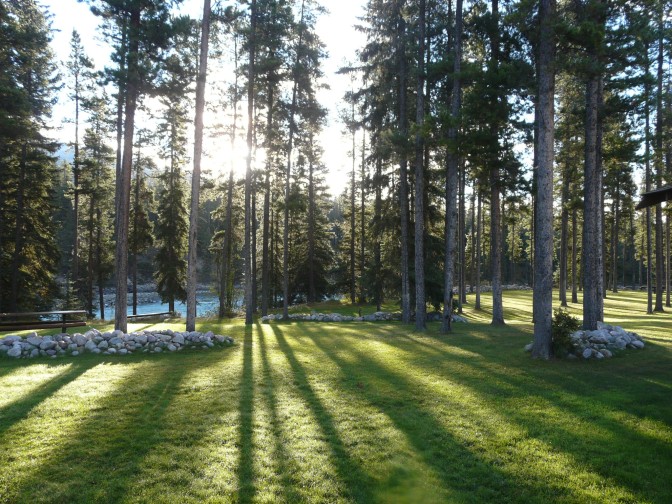 First off though, we had to see that river.

Oh, it was a beauty. Huge, rushing furiously past the shore, opaque pale green. I scanned the shore for bears or other wildlife.Nothing.What a spot though.

Hungry now, we popped open some wine and crisps to nibble and then sauteed up some spicy chicken.So predictable (and so cheap) but we’re hooked on it. Then it was an evening of relaxing and reading the guide books for the umpteenth time and catching up with postcard writing.

Darkness was falling when we heard the park’s guard dog barking loudly, tethered in a small cage about 50yds from us. It must be wildlife! I grabbed the camera and darted out onto the immaculate lawns ,Chris following in hot pursuit, more to stop me doing anything daft than anything else. Sure enough, just on the other side of a shallow gully in the trees was a magnificent bull Elk and his harem of 3 or 4 females.He knew he’d been spotted and I could see him watching us warily as I tried to get a few shots but the light was just too poor.In seconds, they had all disappeared further into the trees.

The next day dawned quite bright and sunny so we headed off to drive to Maligne Lake along, as the Lonely Planet guide promised, ‘Wildlife Highway.’ We saw a mule deer very quickly and after 20 mins some very tame Bighorn sheep which were obviously used to being fed by passing motorists.They grazed past the car as we came to a halt, looking for nibbles and plenty cars in front were feeding them titbits. The various roadsigns promised ‘caribou crossing’ but despite our hopes, none appeared.

This was THE big disappointment we had with Canada; the absence of wildlife.Whether the country is just too forested and too vast and the animals relatively few I don’t know for sure but there was a dearth. Even of birds. A nice flock of Canada Geese were feeding on the grass near our chalet that morning, so that was good.But overall, it did make things seem quite dead somehow, lifeless.

I haven’t much to say about our Jasper day at Maligne Lake.Pictures of the lake had always looked so stunning but although it was scenic it didn’t match where we’d been. The weather had taken a nose dive too a bit. We didn’t fancy spending 2 hours each way zooming up the lake in an enclosed boat to see Spirit Island either at a pricey £60 each so grabbed a coffee and had a walk around the Mary Schaffer loop. Quite pleasant to stretch the legs but mostly very wooded and not hugely interesting. 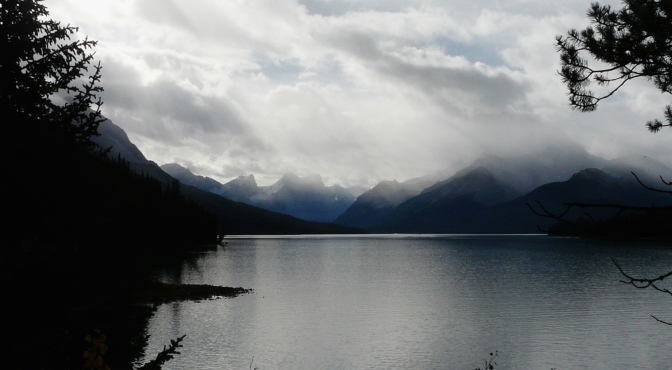 We then headed round to do the Moose Lake loop though it had bear warnings so we joined up with a very nice Dutch couple who also were astounded at the lack of wildlife. They had been to Vancouver  and had seen very little on a couple of boat trips.The walk revealed bear droppings – rich in black berries – but no animals as such.It takes you to a very peaceful little lake, more like a pond, in the heart of the forest. It’s always nice to walk but I did think the trail was a little overhyped by the guidebook. Seeing a Moose might have changed my mind of course.We did have a lovely sighting of a Great Northern Diver but that was it.(Later we found out that a Black Bear had crossed the road minutes before we’d walked up it back to the car.)

We called it quits then and decided to head back to town.The area hadn’t really won us over much.It was certainly wilder and less freqneuted than Lake Louise but nowhere near as attractive.

In fact, we saw zilch by way of wildife on the way back too, not even deer.In Scotland, driving like this we would certainly see deer, possibly golden or sea eagle; squirrels;lots of smaller birds as well as buzzards, red kites,seabirds galore of course at the coast and you’re never far from there anywhere back home.

With time to spare, we decided to ‘do’ the Edith Cavell Glacier walk so drove up an interminable mountain road of switchbacks amidst forest with few views, until the car park came into view.I was getting a bit fed up now of all this blasted forest.It had become dreary and the mountains weren’t particularly attractive ,with  very eroded and broken slopes. Donned the wet weather gear and made our way up the beautifully constructed path climbing up above the flats of the moraines and heading for the Angel Glacier. It was a stroll, no more really and you could see the glacier from the start of the walk. It culminated at a ringed off viewing area, quite a bit back from where the ice was calving into a small lake. We decided to ignore the entry notices and walk down through rubble and along a semi-path, as others were doing, to get close up to the lake at least. We could hear the usual cracking noise from the glacier, always impressive. The lake was ringed with low ice walls and the reason the glacier got its name was clear; its arms were outstretched like angels’ wings at the rock wall, before the ice plunged over into the lake. 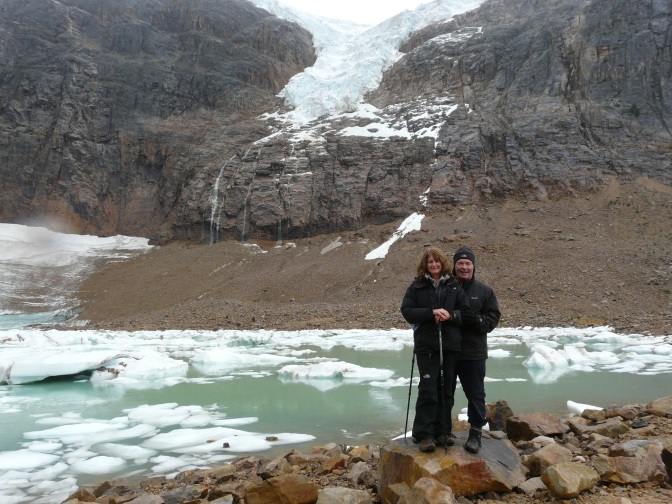 It must be nice to walk higher up into the Cavell Meadows in season and see it all with a foreground of wildflowers. Incredibly a couple of Australian lads were swimming out to a small rock amidst the ice floes! It seemed heart attack cold and a bit dangerous but we took their photos as they asked. Crazies! Oh to be young……

All in all, it was a pleasant walk, worth seeing the glacier and little lake but not perhaps as ‘wow’ as I’d read.

A quick hop into Jasper to stock up on some goodies and wine and it was nice to get back sharpish to the chalet and have some time to just read my Michael Connolly book ( a Micky Haller story) and take a wander across to the mighty river before it got dark.I loved that river; one to be respected.

One thought on “To Jasper via the Icefields Parkway”