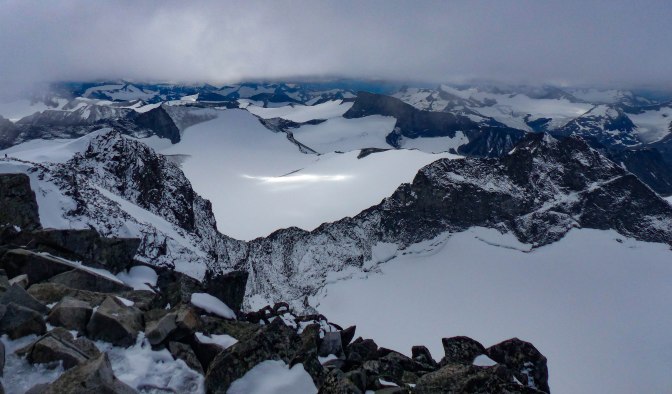 This was unplanned but turned out to be one of our most memorable experiences in Norway – for both good and bad reasons! Galdhopiggen is over 8,000 feet or 2469m. A biggie BUT with a ski road taking you up really high, there’s only around 600m of ascent required to reach the top. ‘That’s easy!’ I said to Chris the night before the fateful day (echoes of Eric Idle in Monty Python and the Holy Grail before he fell over the cliff.) ‘We do more than that at home on a typical hillwalking day.’ Famous last words.

In fact I’ve nicknamed that hike up Norway’s highest mountain ‘Piggen Awful.’ It was a tough day out not only because of the terrain but also because part of it was a guided walk across the glacier and with those guides, WE WERE ON A TIMESCALE. The whole thing felt like Boot Camp.  I could almost hear the whip above our heads. Gee up there! My God, there was barely a moment to breathe far less take in the surroundings and nab some photos. Now I know what Roman slaves must have felt like all roped together on the hoof. It was a 6 hour day which more enjoyably for us, should have been 7 hours at least.

We were based in a lovely old wooden chalet, part of the historic Elveseter Hotel in beautiful Boverdalen. Blue skies and autumn sunshine greeted us on the morning of the hike.

Scraped a bit of ice off the car windscreen then headed up to the Juvasshytta for 9.30am (for a 10am start.)  It’s a beautiful drive on a great tarmac road.There’s a £10 fee to use it, credit card only at the unmanned automatic barrier.The route winds its way up the mountainside, the tundra turning tawny and gold and red. I love the Jotunheimen area; of all the areas we visited in Norway (Lofoten, Western Fjords) this was the loveliest.

Got coffee and tea in the Hytta, very busy inside with lots of people having breakfast and paid our £25 each for the guided glacier walk. It’s recommended that you are guided if climbing the mountain from here. You don’t have to be, but there’s a real possibility of falling into a crevasse otherwise. Then Chris realised he hadn’t packed any sunglasses and had to buy a pair; bang went another £25 but the guides, the cafe girl confirmed, wouldn’t be happy with anyone crossing the glacier without protecting their eyes plus it would be mostly snow at the top; snow blindness was a possibility. (Later, someone else had forgotten their sunglasses and we were a bit miffed to hear them being told to borrow a pair from the Lost and Found!)

As we nestled our hot drinks, Chris pointed out that the walk had already cost us 85 quid before we’d even started out 😦

At 9.45am, we joined about a million other people (ok, 40 or so ) to listen to the guides’ safety warnings and get chest harnesses on. Quite a few youngish children involved – 10 years old or so. Only a few oldies like us. Various warnings came our way, albeit nicely put – on the final slopes we would be ‘on our own’ and those slopes were ‘steep.’ And icy! Oh and if we didn’t make it up to the edge of the glacier from the Hut within an hour or so, we wouldn’t be allowed to do the walk at all. Crikey – off we all went at a furious pace, across the boulder-fields that characterise the terrain this high up, desperate not to fall at the first hurdle. It was 10.15am.

It wasn’t pleasant walking as such but at an easy angle, couple of small snowfields to cross, slippery but fine. I’d asked our guide why we weren’t given crampons but he said it ‘should be ok’; they sometimes used them but not today. Quite surprised by this. A couple of guys in our group had brought their own.

We made it to the glacier within 50 minutes – relief, we’d passed the first test. Long ropes were already being laid out for us to clip into with about 15-20 people on each rope. It was fairly easy walking on the glacier itself, a few dodgy icy bits but mostly fine. Easy angle, almost flat. This, I thought was a dawdle. However, I’d already spied our route beyond the glacier, a black rocky ridge which was looking more formidable the closer we got.

Arrived at the start of the ridge at 12.15pm and the guides told us we had to be back here ready to get roped up again by 2.30pm.It could, they said, take up to an 1 hour to get to the summit hut from here. Really? That long? I peered up at the ridge ahead and thought – ooh, that looks uninviting. There was a mad rush as everyone started to scramble and clamber up the rocks but I wanted to get some shots and spent five minutes or so taking photos; why was everything such a bloody rush? Then off Chris and I set, pulling ourselves up the steep boulders, which were heavily iced in between. 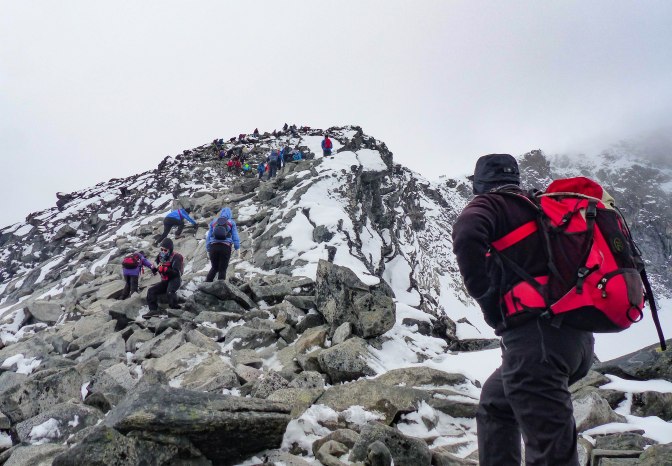 That made it quite awkward to get purchase but the rock itself was mostly very dry. A glacier with crevasses loomed on our left and a big drop opened up on our right. No real exposure though because of the width of the ridge but still you were aware of it. 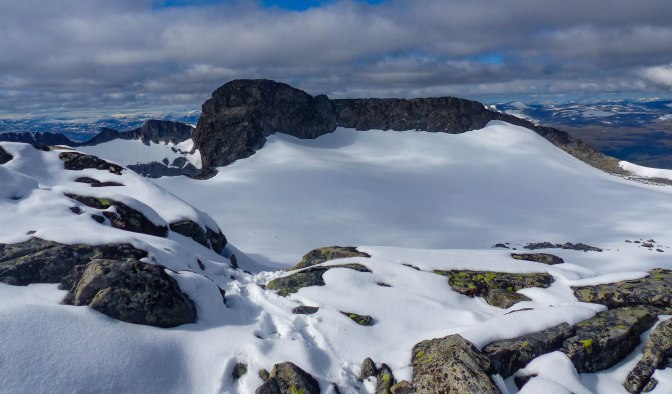 There were actually three notches to climb on that ridge , each one getting steeper but finally, we reached the snow slopes which led to the summit Hut.

Those slopes weren’t a pleasure without crampons. The snow was hard and impossible to kick any sort of steps into. If you were brave, there was soft snow over by the edge, at the big drop but it looked corniced too. No thanks. It was all steeper than it looked and we were relieved to reach the top. At home, we would have had crampons and an ice axe for these conditions. 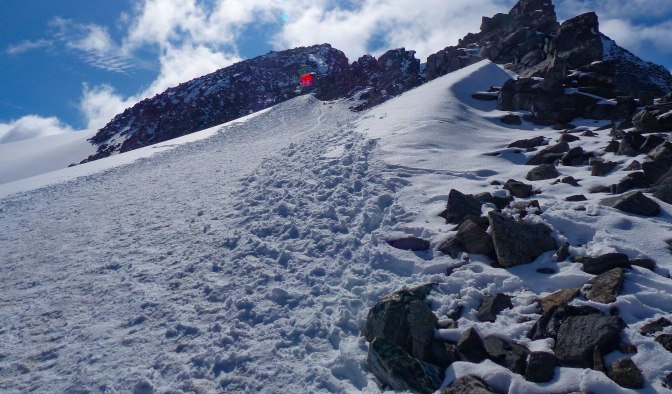 The Hut was mobbed, as was the summit area. Not easy to move around up there either as it was mostly ice. Folk slipping about all over the place. 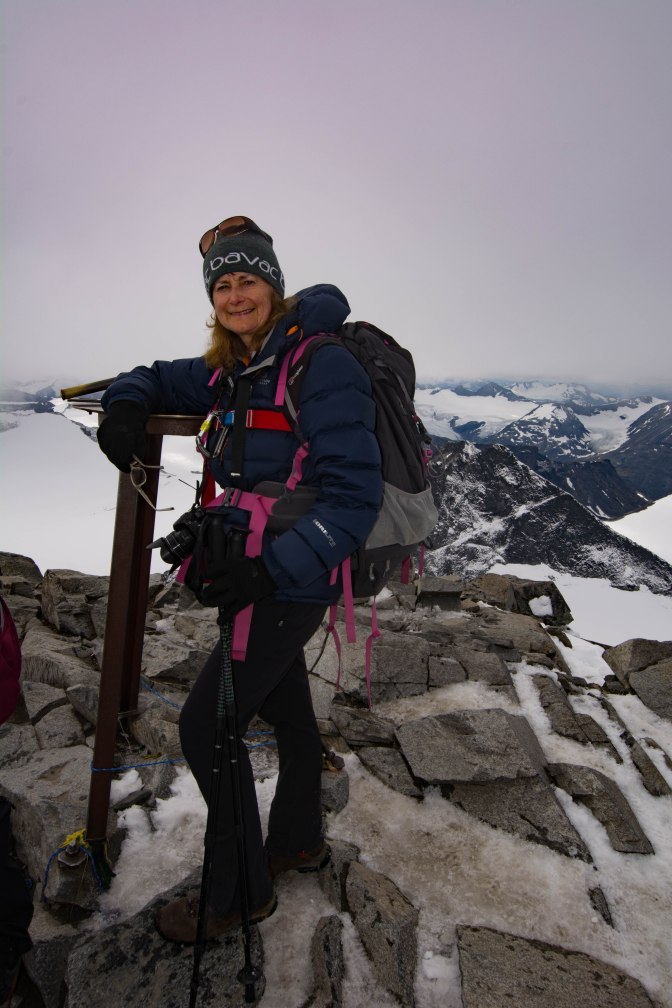 Got photos taken and squeezed into a couple of seats in the Hut; I think we managed 10 minutes in there before we realised it was 1.30pm and we’d better head back down. It had taken us three hours in total since leaving the Juvasshytta to reach the top.

Going down was worse of course! So, so slippery. I just couldn’t get purchase with my boots. I did slide down one section on my backside which really isn’t a clever approach with a glacier and crevasses on one side and a drop on the other but the snow wasn’t TOO slippy; you weren’t going to career down at 50 mph out of control.Soon the angle eased. 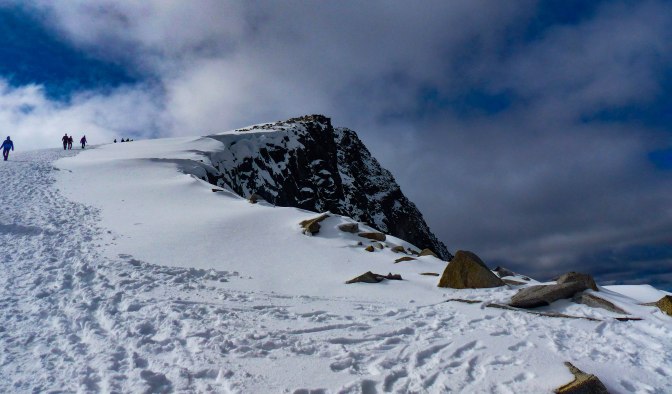 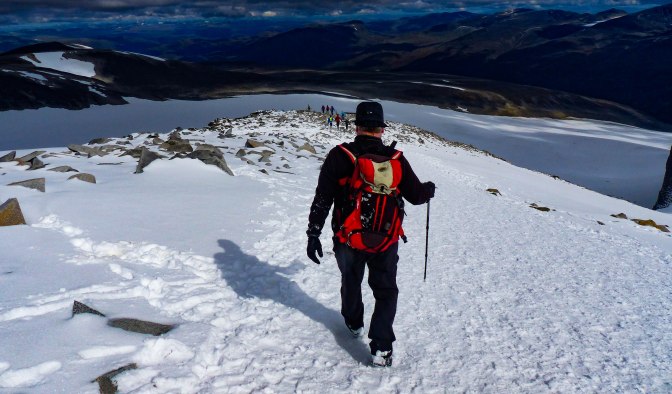 Then a slither and clamber down the rocky ridge again before getting roped up with the guides. 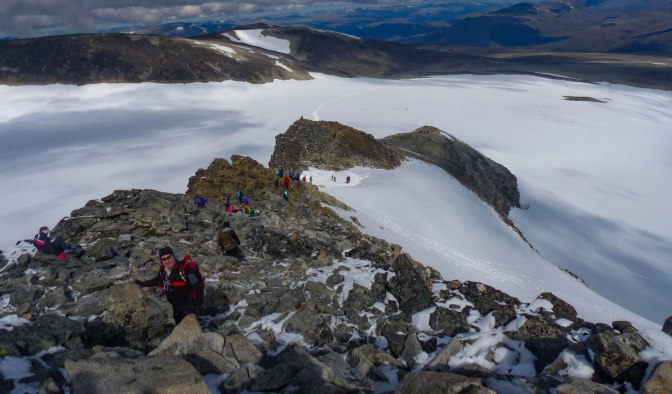 It was so icy at the start of the glacier , our guide tried to cut steps (unsuccessfully) as people were slipping and falling and progress was painfully slow. It was a short section though and we were soon on better ground. 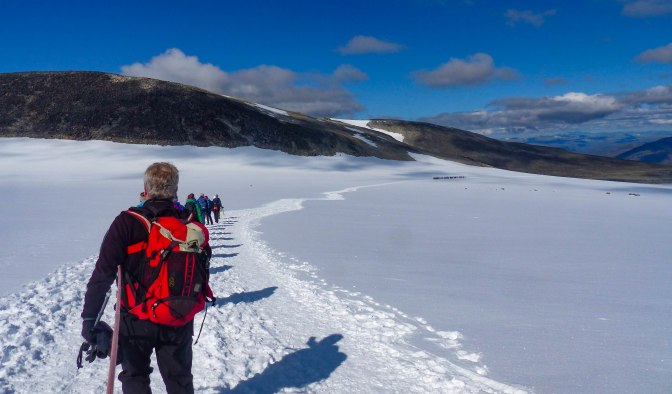 Now the route march started! You were either pulled forward as some people went too quickly, or were suddenly hauled backwards when someone slipped or fell. My chest was sore for days.

Relief to get back to the boulder-field and now we were on our own at least as the guides headed off to the Juvasshytta. Sat for ten minutes and just enjoyed the sun and being up in the mountains.

Then the walk back over the boulder-fields to the Juvasshytta.

With the exception of another group of 4 ‘oldies’ and a guy with his son, we were last back at 4.15pm. Actually one of the guides suddenly appeared – I think he had been left to gather up the ropes or maybe bring up the rear   – and he said something to us in Norwegian as he scooted past not realising we didn’t understand a word. I imagined him saying ‘ hurry up ye daft old bandits. Get a bloody move on.’ All the while with a big smile on his face. We just nodded sagely, smiled back and ploughed on.

Was it worth it? Yes of course it was but it was a harder day out than I’d planned and we’d psyched ourselves up for a relatively easy slog up a big whale back ridge. Not quite like that. The views at the top were good – not wow, but a study in charcoal and white. Long black rocky ridges for miles on end, with huge snow bowls/glaciers filling the corries. As we drove back down the Ski Road I preferred the beautiful , colourful mountain landscape that unfolded in front of us.

The late afternoon sun and cloud were sweeping shadows and ever changing light across the hillsides and the brilliant bright reds of black bearberry and the soft pastel greens of lichens, made it all just a dream to behold.The beautiful Jotunheimen in all its glory.