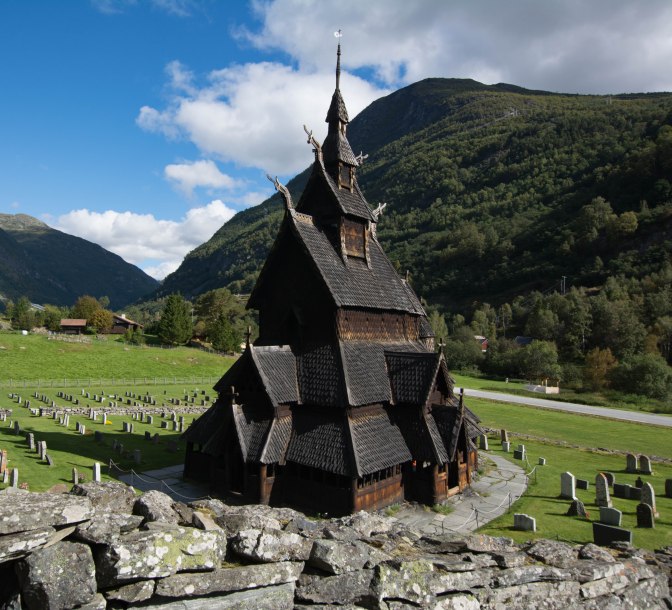 These are magnificent buildings from the 12th century, other wordly, Tolkeinesque. Or, as my son said when I sent him a photo of Borgund Kirk, like something out of one of his video games.800 years old, built completely of wood with dragon head finials and exquisite animal-art carving, only 28 exist out of the original 1,000 which existed throughout Norway.

We visited Borgund Kirk first, after debating whether to detour 19 miles each way from Laerdal, en route to Sogndal.I am so glad we did as this church had the finest exterior of all the churches; it really was a superb sight. There is also a lovely visitor centre set in the attractive rural valley in which the church stands proud. Interesting small museum with Viking artefacts on display, including a beautiful comb of walrus ivory.We found it overall more impressive than the plainer World Heritage Stave Church at Urnes though the latter is the oldest church (built 1130) and has the finest carvings of all. It also offers a short guided tour as part of the ticket price. Each church cost around £8-£9 for each of us to enter.

They are very small and simple inside and do not take long to see. I loved the colour of the dark wood and the aroma from the tar which is used to preserve it. The wood changed colour when the sun came out, going golden then darkening as the clouds came and went.

At a time when churches were being built in stone, or being ordered to be so built, the supreme skill of the Vikings in understanding the properties of wood was acknowledged by the Pope and dispensation was given to building in this material. But by the Reformation, the Lutheran Church demanded that larger churches were built for parishes and the old wooden churches were destroyed and replaced with stone churches.

There were separate entrances for men and women; women had to enter by a door on the north side as ‘the devil always came from the north.’ Those who were sick had a small window through which to have Mass administered. The pre – Christian images in the carvings were a clever incorporation of older beliefs with the newer Christianity, as Norway only became Christian in the 11th century.

There is a beautiful visitor centre beside the church which had some fine exhibits of Viking jewellery and artefacts. 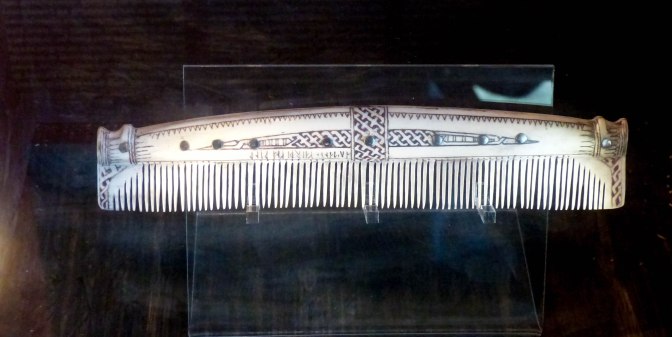 We visited Urnes Church on our return from the Jotunheimen, travelling down the minor road from Fortuna, a nicer drive than the main road from Gaupnes on the opposite side of the Lustrafjord.

Urnes has a plainer exterior than Borgund but the carvings are wonderful. Interwoven plant and animal forms, some of it reminiscent of Celtic design. The artistry and skill is just superb. A very interesting short guided tour was part of the ticket price also; we were the only visitors.

We then took the little car ferry over to pretty Solvorn, watching porpoises hunting in the turquoise water. 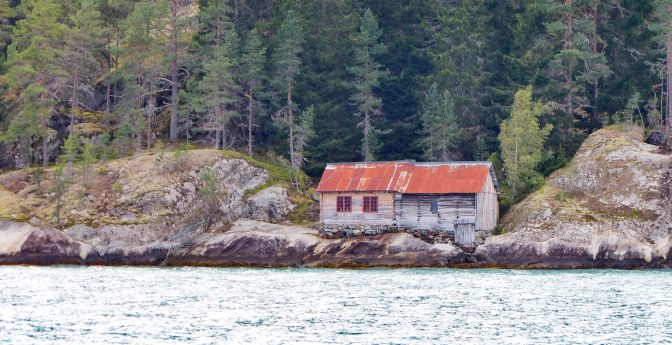 There was an honesty box at the ferry where local apples and plums were on sale. The plums were gorgeous, really sweet; the apples were a bit tart for my taste! We’d already noticed orchards all over this part of Norway, dripping with bright red apples. 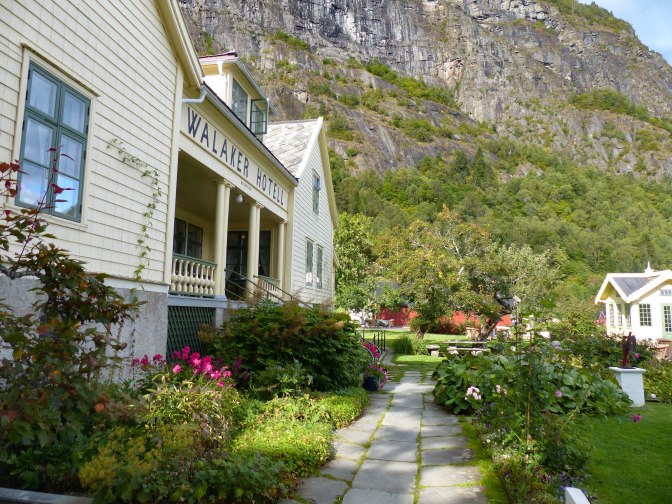 Had a lovely tea stop in the beautiful historic Walaker Hotel overlooking the fjord. The owner, a really interesting friendly guy, had connections with Scotland and recognised our accents -even placing me to Glasgow(he tried Edinburgh first!) We sat in the delightful garden, surrounded by roses and hydrangeas, enjoying the September sunshine and the quiet and having some tea and coffee. £10 for the two of us in total but worth the splurge for such a beautiful location.

The last Stave Church we visited was Hopperstad, near the small village of Vik as we headed back from Mundal/ Fjaerland to Bergen. Again, a fine sight, a very interesting tour from a local volunteer who was surprised at our knowledge of the churches.We had learned a thing for two in the past few days!