On paper, 120 miles and 3 hours driving non stop.This section took me more than double that time because I stopped at so many wonderful sights along the way. Making time for these are what this section is all about.It was a busy, nothing special kind of road until I reached the magnificent Dornoch Firth when things started to take off and the traffic volume calmed down.

DORNOCH – not a must see but a pretty wee village with some nice cafes if you need a caffeine and cake stop (any excuse for me). It’s also home to what has been voted one of the world’s top 10 golf courses, beautiful, Royal Dornoch.The village has a long sandy beach, great for kids but it doesn’t match the splendour of what awaits on the west coast.

DUNROBIN CASTLE – I was so in awe of this castle the minute I drove into the car park.It’s an absolutely superb fairy tale castle, a bit like a French Chateau. It sits all on its own on a wild, rocky coast. There’s a ‘Bird of Prey’ display most days and a very unusual museum in the grounds with everything the Duke of Sutherland shot and stuffed,  here and abroad; curiosities from Africa and India; World War memorabilia; and exquisite Pictish carved stones. If stuffed elephants and giraffes aren’t your thing, the Stones may well be.Gorgeous gardens.A joy to walk around.The views across the garden from the battlements to the sea beyond is a difficult one to pull yourself away from. But onwards you must go…. 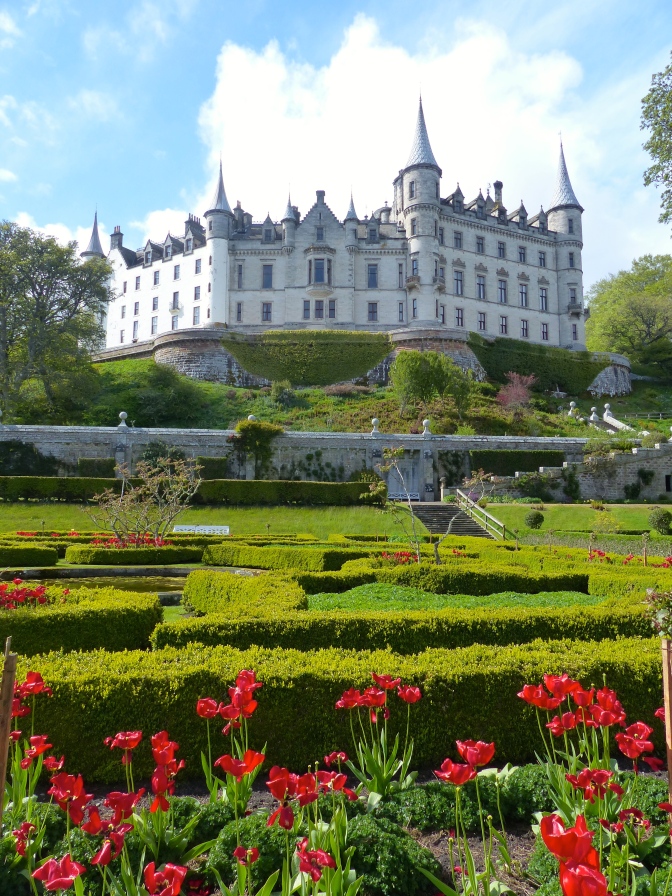 LATHERON WHEEL – I stopped here on a whim because I loved the name and the pretty, restored houses at the village entrance.Following the narrow road downhill, I arrived at a tiny stone harbour, very picturesque and a fine spot for a breathe of that cold Northern fresh air. Not a soul around. 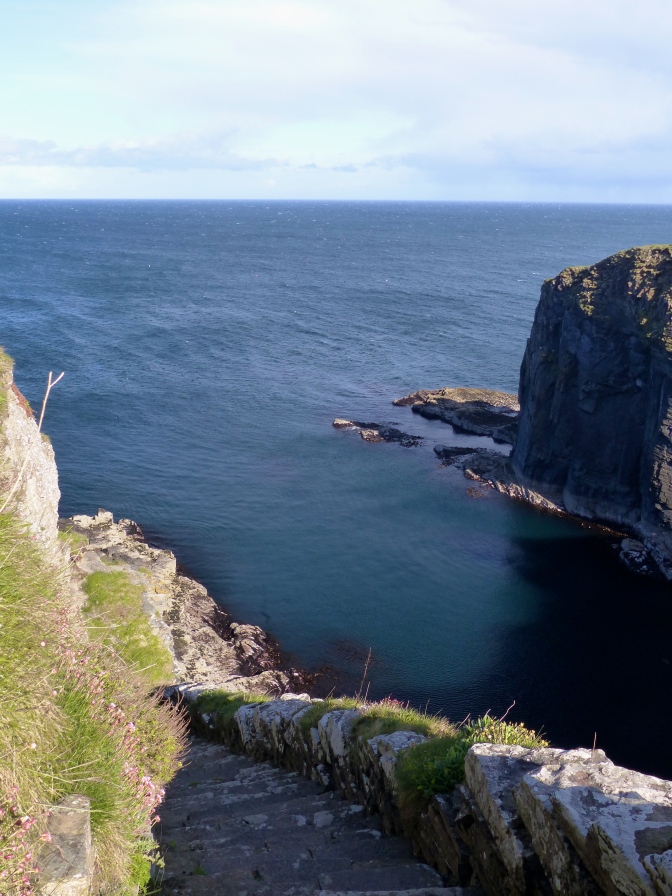 One for every day of the year they say. I suffer a bit from vertigo and was nervous about whether I’d manage these steep steps but they felt very safe and there’s a well built stone wall to one side, giving a great sense of protection. The steps are beautifully maintained and cut into the cliffs so you are winding your way down a sheer cliff wall but there’s no danger of hurtling over the edge into the sea unless you were really determined to do so. A small stone fishing harbour, in use long ago, awaits below, pristine. Around the harbour, the cliffs blocked the sun and I wasn’t keen on the very slippy sea-weedy sloping rocks underfoot and which ringed the deep water bay, so I soon escaped back up the steps into the light again. Hard lives these fisher folk led; they must have been fit carrying creels up and down these steps every day.

In typical fashion, I arrived too late at the Steps to enjoy the cafe which gets good reviews so missed out on a much needed scone and cup of tea.

The Steps can be hard to find. Look out for a small row of houses off the main A99 and a telephone box near the signs for the Cairn of Get.The Steps are 10 miles south of Wick. 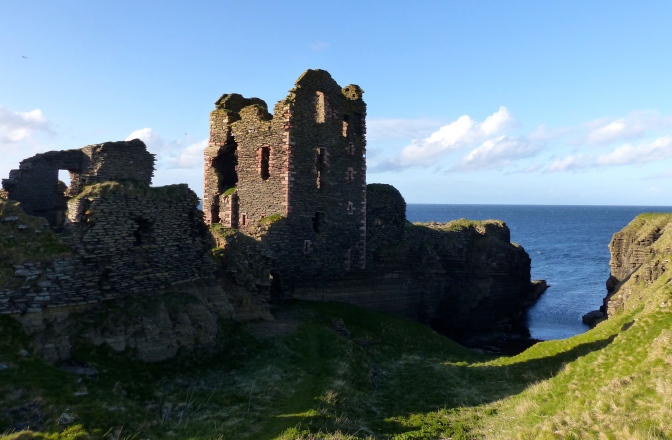 Girnigoe is perched on a crag above the sweep of pale sand that is Sinclair Bay. It is 3 miles north of Wick and a cracker of a ruin. If you love castles, it’s well worth the (seemingly endless) but actually only 15 minute detour each way off the A99 through the wonderfully named villages of Papigoe and Staxigoe. The Norse influence is now kicking in.They themselves seemed quite hardscrabble places but I may be being too quick to judge.

It’s not a large site, the castle, but what a spot. Free entry.

By now, I really noticed a raw, hard edge to the landscape and in the small, grey houses of the communities dotted along the coast.A deep sense of  wild northerly-ness and another world.

I was pretty sure I’d not like this place, given the bad press it gets as  a ‘tourist trap.’ It’s much maligned as a –  ‘is this all there is?”  – kind of place but somehow, I took to it right away. The main village,  a bit inland from the harbour , was a bit of an untidy, unattractive straggle but around the harbour was lovely. (Just as well,  as I was staying two nights there on my first visit.) Yes, there are only a few buildings, a souvenir and outdoor shop, a cafe, toilets and some accommodation including a very nice campsite.Beyond all, one of the world’s most dangerous stretches of water, the Pentland Firth,  surged wildly.

After getting set up in the tent and cooking my tea , it was time for a stroll along the lovely, easy coastal path which leads past the camp site and along the shore to the white sands of Sannick Bay. I only went as far as an information board that evening, a nice 25 mins or so each way. Always, the ocean surged beside me and big Atlantic Grey seals bobbed their heads , curious as they always are at any human being.

Orkney Day trips leave from here on the small boat in the photo.Unfortunately, next morning, the wind had got up so much it was cancelled and a bus load of travellers from Inverness looked very disappointed to be told their trip was off.

There are also boat trips offered round the spectacular coast which I’d like to do someday but time didn’t allow that this visit.

Orcas hunt in these waters too and I was on the lookout for them.No luck but no wonder – I found out later from local Orca watchers that the resident pod of Killer Whales cruised along the coast at 4am the next morning, long before I emerged from my tent at 7am.If you snooze, you lose…so true.

I loved my first glimpse of Orkney from John O’Groats and the intriguing, deserted island of Stroma with its abandoned houses.

DUNCANSBY STACKS WALK – don’t miss this walk! To me, this is a highlight of the NC500 and particularly the east coast. Around 10 mins from the car park at Duncansby Lighthouse, took me to the edge of the cliffs and a jaw drop view of the truly spectacular coastline here, with it’s amazing offshore stacks.The scale is incredible.These are possibly the most dramatic cliffs of the whole NC500. I enjoyed the cliffs at Cape Wrath too but I think these are even more impressive.You cross moorland which is a bit boggy so wear decent shoes. It was such a glorious May morning that I followed the track round the top of the cliffs to see it all from a different angle.You could walk for miles.Great Skuas swept past me overhead, aggressive but magnificent birds.Larks soared high in the sky, singing their hearts out.There wasn’t anywhere I would rather have been. It was simply beautiful. I spent a good 2 hours out on that headland and could have stayed much longer. 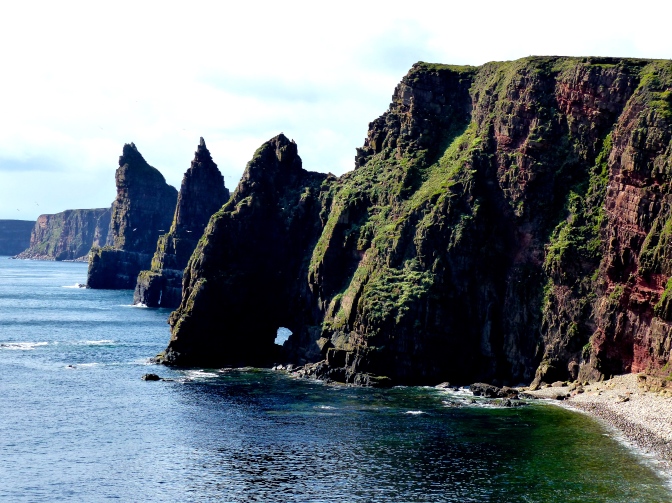 The bird cliffs at DUNCANSBY HEAD beside the Lighthouse, are well worth a look; you’ll hear and smell them before you see them in the breeding season (May -August). Puffins can be seen too. Look for the guys with the long lenses as a pointer to where the puffins are (usually on the left on a grassy stack near the car park.) 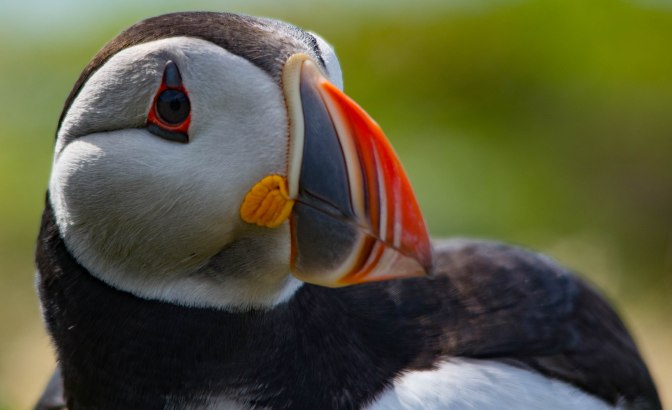