‘Yer climbin’ CARDIAC hill??’ Our Airbnb hostess looked horrified as she popped more toast on the table, at the same time shaking her head. ‘Aaw that’s a tough one, very tough.I did it once… nearly passed out.They use it for training you know.Runners and the like. ‘

I gulped down more tea, wondering if we’d made a terrible mistake choosing innocent sounding Torc Mountain as our holiday hike.Chris raised an eyebrow and his blue eyes narrowed; his only real concession towards showing displeasure. I do all the research for our trips, including walks; but as well as getting occasional praise for that when everything works out well, I shoulder the responsibility when it doesn’t!

Everything I’d read about the walk suggested it was an easy one up a small hill above Lough Leane, giving great views all around. A TripAdvisor query I’d made, had also elicited the response from a local that it was definitely the hill to do ‘after a hangover.’ If we wanted something tougher (we didn’t), we should opt for Mangerton Mountain.

Well, I’m very glad we stuck to (my) guns and did Torc Mountain because it was one of the simplest, easiest ascents of a small hill I’ve ever done.We had a minor problem in finding the car park for it and ended up at the Torc Waterfall parking area.We could have started from here but it meant an extra pull up through woodland and we have enough waterfalls at home not to necessarily want to prioritise seeing another small one here.The Torc Mountain starting point lay up a minor road which branched suddenly , unsignposted, off the N71 to Ladies View.

At 10.15am, we set off from the correct Forestry car park and after half an hour on a good wide track,  we joined the ascent path to the summit, set at an easy angle and with long stretches of beautifully laid planks and duck boarding over boggy bits.Luxury!

In around an hour we had reached the top, a nice spacious craggy summit with lots of boulders to sit on to admire the beautiful view.

The finest direction was towards the impressive range of Macgillicudy’s Reeks, set off by a series of small loughs in the foreground.Below our feet lay brilliantly blue Lough Leane and the gardens of Muckross House.Beyond the lake shore, the landscape flattened. The mountain views reminded me a little of the Trossachs area in Scotland’s Southern Highlands. 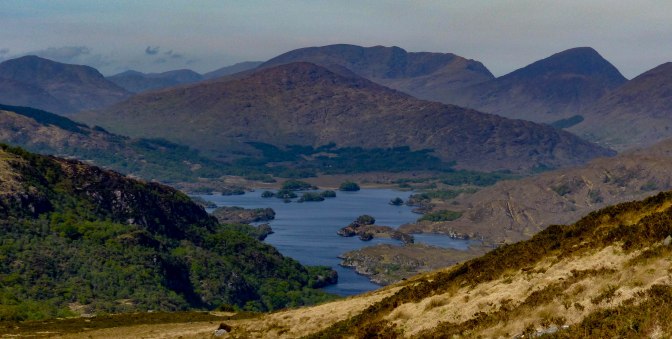 After 20 mins of enjoying the fine surroundings of our perch along with about half a dozen people, we headed downhill, fuelled now by the joy of having ‘done’ a hill, albeit a very minor one.The charms of Muckross House and its garden cafe now awaited.Chris has been plagued with a very sore right heel for months now but he walks through it with great stoicism; I was relieved that I hadn’t huckled him into something much more arduous and time consuming, yet which still delivered on the view front.

Our short stop at this beautiful place also led to one of our great holiday memories as we shared a cafe table with two private bus tour drivers.The Muckross Estate was thronged with thousands of locals and visitors but the grounds, which edge Lough Leane, are huge,  the parking and entry is free and the gardens are an absolute joy.The cafe is a bit cafeteria like in scale but the food looked ok, so tea and carrot cake for me and a latte and vanilla sponge for Chris.

The only two seats I could see were beside a smartly dressed guy in his fifties but he waved us to sit down.We exchanged a few pleasantries and he told us he’d worked in Edinburgh years before so had a go at placing our accents.From there began half an hour of great banter, as we were joined also by his partner in crime  – they were both ferrying three women (in different minibuses, separate groups) around the area and were enjoying a break.’We’re the same people aren’t we? The Scots and the Irish,’ said Robert and Chris agreed  – ‘we’re Celts.’ We did seem to hit it off very quickly , as when you recognise a similar mind set or humour and the chat is easy. I think our sense of humour was clear when Brian said that at the end of his 5 day tour with the women, he was going to suggest an orgy, convincing them it was the traditional Irish way to celebrate the end of a trip. We both burst out laughing and various Viagra references were made.I suggested it might be put to better use if he gave some to his clients rather than himself.That led to a joke, accompanied by hand gestures, about trying to park his bus at a carpark but the barrier wouldn’t rise.So he gave it Viagra and sure enough, the barrier rose………and when he came back three hours later, it was still up. (It was the way he told them.)

Robert then entered the fray with two brilliantly told jokes that involved the Rev Iain Paisley pounding the Pearly Gates of heaven to get in; and a similar joke about a family of ‘travelling people’ or as he called them, tinkers, who tried to do the same.

They told these stories so well, I was in tears of laughter when the punchlines came. Very non-PC! Great couple of blokes to meet up with; it would be a good night out in their company.

Then it was off to stroll the beautiful gardens, filled with pink and red and yellow rhododendrons, mighty fir trees, bluebells and honeysuckle, fuchia. A glory of colour with the lake and mountains as backdrop.No wonder it was busy yet it was easy to find quiet little paths to wander along all on our own.

This famous spot was on our route to Kenmare and the Ring of Kerry so we stopped off to   have a look.It was nice but not wow and not as fine a view as we’d already enjoyed at the Loch and from the hill – horrendously busy too with coaches and cars everywhere so we moved on.

I actually liked best the view from a pull off before this more famous one, not much parking as such but beside one of the lakes. There were some rocks and boulders to scramble up onto to admire the scene.Lovely country, really fine views.

Before we left it all behind we had one last stop at a high point looking across to the Gap of Dunloe, right at the junction for the Kenmore/Black Valley turn off. Then we drove down to pretty Kenmore, a very attractive small town, much lovelier than Killarney, a ‘real’ wee place and a chance to stock up for the next few days. Our house high above St Finan’s Bay on the Skellig Ring, south of Valentia Island was relatively remote, no shops, so we didn’t want to get caught out with a late arrival there with no chance of finding a shop. Eating out never appeals on a first night’s arrival somewhere – I just want to get settled and enjoy the new place rather than haring out again. Plus I generally enjoy home cooked food more than offerings in most restaurants. Heck of a lot cheaper too.I’m just glad neither of us minds cooking on holiday.

The weather had taken a turn for the worse so we never saw this section at its best.There were nice views over to the mountainous Beara Peninsula though the terrain immediately around us was mostly woodland and not hugely interesting.But it took off once we reached Caherdaniel and even in the gloom and rain we could see this was a special piece of coastline.

Very wild,  rocky moorland, scattered islands and everywhere looked surprisingly well populated. It was late now – around 6pm  – so we were keen to press on and get to our Airbnb house and relax.We would drive back along some of this coast next day, to see the Staigue Ring Fort and Derrynane beach.

A fine drive,  especially once we drove over the hill beyond Waterville and Ballinskelligs and swept down to the Bay which would be our base for the next 3 nights.It was the loveliest section we’d seen so far today. It’s technically not on the Ring of Kerry, St Finan’s Bay,  and is far less frequented because of that. It really was raining heavily now, so we got unpacked at our huge house high above the bay, all on its own, up a rough track.Very pleased with the location and interior.Met the owner, briefly, who ran a farm further down the track.Then settled in for the night, to enjoy a glass of vino and pop spicy chicken thighs and drumsticks into the oven to heat.Chris made up some potato salad, boiling a couple of spuds and chopping some onion and beating in some mayonnaise .It beats potato salad shop – bought,  hands down! I also quickly cooked some broccoli and courgettes,  just because I love lots of veg.We had some nice looking strawberries for afterwards too and lots of oranges.And a supply of good chocolate for me. We wouldn’t starve!

Day 5: Staigue Ring Fort, Lunch at The Blind Piper and a quick visit to Derrynane beach.