It wasn’t possible to make an advance booking on the Mousa Boat trip but a phone call to the guy who ran it assured me there would be plenty room.In fact, there wasn’t but all he does is do an extra run.Problem solved!

I never got the chance to say cheerio to Wilma as she never surfaced, leaving me to potter about making tea in her kitchen.Airbnb can be a bit odd like that; I hadn’t quite picked up what she’d said about the breakfast arrangements and probably misunderstood her.She may have thought I was happy just doing my own thing but it would have been nice to have another chat with her.I took to her right away, an interesting lady with a kind manner.

First stop, just a short drive to the other side of Lerwick (or what should have been short, I got lost again – really made a meal of getting round this small town!) was Clickimin Broch, a beautiful structure though overlooked unfortunately by the town’s modern housing.But a fine sight inside the 3,000 year old walls.I failed also to find  pair of footsteps carved in the stones which were possibly evidence of kingship ceremonies, similar to Dunadd in Argyll.Would like to have seen those.

By 10.30am it was Fjara Cafe time, a place with great reviews and as someone who collects cafes, a ‘must try’ place. It was packed out when I went in, not a coveted window table to be had.Brilliant location right on the rocks overlooking the bay and  – I had read – a spot where Orcas occasionally come in on the hunt! But not today….

Good pot of tea and a warm fruit scone; bliss.I also bought a pistachio Brownie to take away, eager to try more of the nice stuff on offer, though at this time most people were having Eggs Benedict or Pancakes and Maple Syrup; full cooked breakfasts and the like.I could have done without the jazzy music playing but that seems to be the way of it these days; maybe it’s a ploy to discourage over-staying! (or I’m just getting old and grumpy)

Fortified by a healthy white flour, sugar and butter treat, it was time to make for Sandwick, a  sizeable village 15 mins or so south of Lerwick and home to the Mousa Boat.Once off the main drag, a steep single track road took me down to a little harbour, a nice spot, where the big glossy heads of Harbour seals bobbed offshore and Arctic terns pitched and dived, filling the air with their shrill, high pitched calls.There was a small interesting little museum, charting the history of Sandwick and the Mousa boat with atmospheric old photos of harder times long past.

I had a good while to spare before the boat left at 1pm so decided to head back to Sandwick and find the Community Hall, where a Tea, Cake and Music Lunch was advertised.Wilma had told me that this was a great tradition on Shetland on a Sunday.It took me an age – again – to find the Hall, there wasn’t really anything signposted or any building that looked like a Hall but finally, I pulled into a small parking area.Paid my £8 and got a seat , the hall decorated with fairy lights and fresh flowers. I chatted to a lovely local man (actually someone who had moved north from the central belt) who talked about the village and Shetland in general.The place soon filled up with barely a seat left. 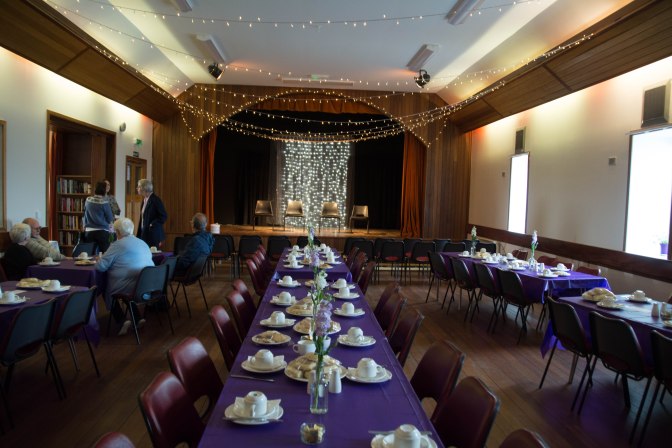 Lunch was good home made tomato and basil soup; bread/rolls; then a choice of puddings – I chose trifle which is one of my favourite desserts but it had some very odd quite artificial ingredients and I have to say, was a major disappointment:( Then cups of tea and all accompanied by local children playing foot tapping ceilidh music on the fiddle, accordion and guitar.They were great!

By the time I made it back to the jetty at 12.40pm, there was a sizeable a queue.The boat had the capacity for around 40 or so people but was very soon filled to bursting. 5 folk had to wait for the second run, half an hour later.

Once onboard, I got talking to a couple from Glasgow who’d had the treat of watching a pod of Orcas come in to hunt seals at Haroldswick, on far flung Unst. They’d been sitting having a coffee in Victoria’s Vintage Tearoom(tomorrow’s treat), when someone had shouted everybody outside and coffees and scones and the like were quickly abandoned in the rush.Lucky folk! Haroldswick here I come, I thought – if nothing else,  I loved the name.Wick usually means Bay so I guess it was named after a Viking of the same name.

The 10 minute or so journey was very pleasant on calm seas, a porpoise surfaced at one point and then we were dropped off at the tiny jetty on Mousa Island. It’s an RSPB Reserve so walking was confined to a circular path making its way round the small island, about 3 miles in all.It was possible to go straight to the Broch in 20 mins or so but given we now had around 3 hours on the island, the idea was to eke out the time exploring it a bit more.It’s an important nesting site for seabirds but is particularly known for being the haunt of the world’s smallest seabirds – Storm Petrels.Tiny little things which spend all day at sea then return in their thousands to the Broch at night to nest in its myriad nooks and crannies.There was a night time boat trip on offer to watch this spectacle.

Half of the folks went one way, the rest the other on a calm overcast day, the temperature very pleasant.There were nice views out to sea and to the huge cliffs of Noss.Great Skuas patrolled menacingly but as long as you stuck to the path, there was no danger of incurring their wrath by straying onto their nest sites.Larks sang overhead and the occasionaly head of a seal broke the surface, watching this latest troop of strange land creatures , human beings , amble along beside the rocky shore.

It wasn’t a wildly interesting island, though pleasant enough.There were nice views towards Mainland as the path turned towards the Broch itself, an amazing sight.The scale was incredible and it was just so beautiful sitting there in the landscape, right beside the sea.Unlike any other Broch it was so intact , it was possible to walk up the narrow stones steps between the double thickness walls to reach the top. 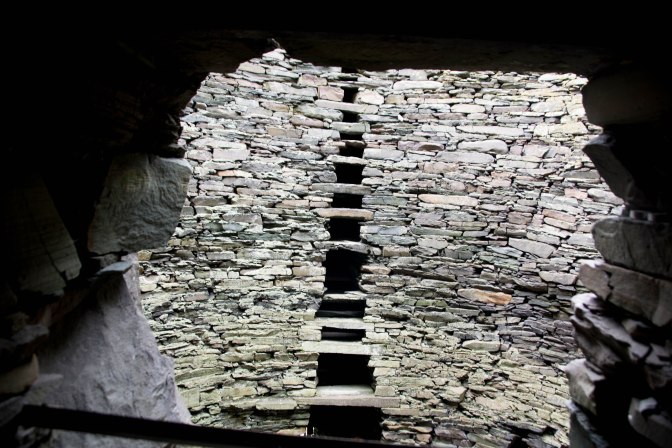 A torch was essential to negotiate the lower section of steps, particularly on the descent as it was pitch black. Quite a place.

Then it was an easy stroll back to the jetty with nearly an hour to spare.I think if anything, the trip could have been a bit shorter.I chatted to the two boat guys about Orcas and otters and Shetland.Very friendly and they had some amazing stories of Orcas coming right out of the water and resting their chins on rocks, checking for seals.Also curious otters which had been known to enter the open doors of houses for a nosey around!

Time to stock up at the Tesco Supermarket in Lerwick and decide where I was going to spend the night. It was dry so the tent beckoned and off I headed to tiny Skeld Caravan and Camping site in West Mainland.It was  pleasant wee place right on a bay, only another 2 tents there, with pristine showers and a great wee kitchen with fridge, cooker, microwave and toaster.Perfect.Sometimes, fresh shellfish can be bought from the local fishermen but I might have been too late as none were around.

So – baked potato, tuna and onion mayo and a salad was my fayre for tonight and very tasty it was too.There was one very odd fellow camper though I never saw him but heard his snoring (unbelievably loud) on arrival and at 8am next morning when I passed his large tent  – still snoring! Bizarre.(I set up my tent at the opposite end of the site, well away from the racket.)

Had a quick look at the otter hide they had nearby, complete with pairs of top notch binoculars but none around. A decent night’s kip, asleep by about 10pm, the travel catching up with me a bit.

Next day:Reaching the most northerly inhabited island in the UK and getting spooked in the fog at the Hermaness Bird Cliffs

One thought on “SHETLAND IN 4 DAYS(Day 2: Brochs and Cafes and lunch with the locals)”