A little basket of fresh baguettes was delivered to our room and we took it plus our various breakfast supplies, down to the tiny garden where there were tables set out. There was only one other couple as guests but no sign of them this morning.Then off we went to visit the Chateau Comtal, the impressive 12th century fortress which dominates the Cite. However, our luck was out again as it was shut due to a strike of public sector workers! That was probably what had closed Avignon’s loveliest bridge yesterday too. Groan…oh well, it was still a pleasure to wander the fairly small walled city itself again.(After dinner out last night, we had admire the walls lit up at night, really quite something.) The 5 star Hotel de La Cite was very impressive, with its delightful gardens and fine views over the witches hat towers and walls and across the pleasant countryside. Couldn’t resist an (expensive) coffee here, even if only allowed the privilege of sitting at a table on one of the hotel’s little stone terraces, enjoying the sun and the location. 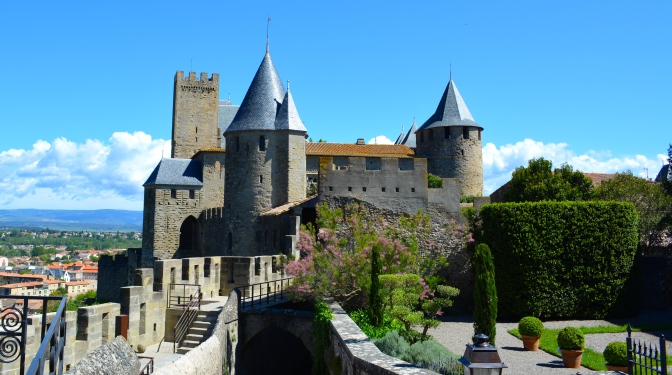 I would come back to Carcasonne definitely. We have seen several fine walled cities and towns in Europe but this to me is the grandest of all.

Then a wander round the base of the walls on various paths before heading down to explore the new town.Very pleasant it was too in the sunshine.

Our Plus Beaux Villages of France map suggested that only 40 mins drive away or so was the village of Lagrasse and I can never resist those pretty, medieval places. So off we set for an afternoon explore of what proved to be a sleepy gem , not a soul around and with many of the ancient houses bedecked with roses. A fine hump backed bridge over the river Orbieu led to the grand Benedictine Abbey of St Mary founded in the 7th century. Romanesque, it looked wonderful but alas, it was also shut! Not that the monks were on strike (!) but we’d hit a closed day.

Another stroll through the central square of the village where there was a wood – framed covered market built in 1315.1315! Astounding. Oh that what we build today could be as beautiful and long lasting.

I was very glad we made that short journey through attractive, soft countryside, much of it vineyard covered – no wonder the Romans and Visigoths and Saracens had fought over it. Rich lands which even today appealed to us both very much. A nice wee Gite in the sun with a shady vine – covered terrace; I could think of worse ways to spend a few days than based around here.

A final wander through the medieval Cite of Carcassonne then we retreated to our room to eat in – the usual cold stuff which somehow we never seem to get fed up with ( just as well!) Reading and planning tomorrow’s explore and catching up with the family in texts and emails (oh the joy of Tablets and wi fi).The rain came on heavily again so no wandering about later but quite nice to have a bit of relax with the feet up.We were still clocking up around 9 miles walking every day, around 18,000 steps.Life in the auld pins yet!

Tomorrow, we would cross the Spanish Border but not before visiting the stunning Cathar castle of Peyrepertuse and little Collioure on the well named Cote Vermeille – the Vermilion coast.Such a beautiful name.

Goodbye to Carcassone and our lovely wee apartment in the old walls. We were now driving to Peyrepertuse, a spectacular ruin sitting on a crag that looks impenetrable from below. I’d read that ‘vertigo sufferers’ might not enjoy it, so had some trepidation as , despite loving hillwalking, I don’t have a good head for edges and ledges and sheer drops. Chris’s reaction as ever was ‘it’ll be fine!’ I wasn’t convinced.

The 90 minute drive was interminable, along very winding, twisting roads, completely deserted and flanked with heavy woodland or denser forest – no views at all. It is not a drive I’d enjoy doing again, very uninteresting and NOT for anyone who suffers car sickness. It would have been far better and not any longer, to have headed for the motorway then cut inland on much better roads.

But arrive we finally did and wow, what a place. I felt my stomach turn over a little at the thought of the tiny access path which must wind its way up to the top of the cliffs and just hoped I’d make it ok.

Paid our ticket money – there were only a few other visitors – then made our way up the rough path through bushes and thickets. In fact, as we climbed higher, the steep ground such as it was, was well screened and protected by dense shrubbery so the guide Rough Guide had exaggerated the problem considerably and was I mighty glad about that (though it had given me hours of unwarranted, niggling anxiety too.)

We spent about 45 mins in the ruins themselves, clambering around and reading the info boards. Then there was a final section up a steep path but with a good safety railing, to the very top, a tiny eagle’s nest vantage point which gave superb views over the whole site and the countryside around. We could see another famous Cathar castle, Queribus, perched on a crag at the other side of the valley. Loved this site.

I’d read of a nice local place en route to the coast, L’Auberge de Vigneron, which I thought might do a good lunch or at least coffee and a snack so we made a minor detour to the little village of Cucugnan. It was the only restaurant open but was catering for a large group of locals and closed to visitors! Our luck continued! A bit of a blow but a small bar nearby offered coffee, so good to get a break there before the push on to Collioure 80 mins drive away on the E15 motorway. I had made up some cold meat, cheese and tomato baguette sandwiches as a back up given we would be on the road a fair bit today, so they came in handy.

I can’t say that I was hugely impressed with the Languedoc countryside as we approached the coast, though we had taken the fastest route here, rather than the more rural backroads. It was all very green but we are used to green at home and the landscape didn’t have as much charm as I’d expected. I preferred where we’d been, which was unusual because I love the sea.We were now in the Cote Vermeille, an area of small rocky bays and lush hills with some distant views of the snow capped Pyrenees. Got parked easily on the main waterfront of Collioure, photos of which had always impressed me. Yet somehow up close, it felt faintly scruffy and cramped and without the gloss and wide views of the Riviera. The bay was small and enclosed and to me, slightly claustrophobic. We climbed up the hill on a rough path to admire the enormous 13th century fort, very impressive indeed. Wild purple geraniums grew in profusion on the grassy banks.

Then down to the stone walkway that led by a small beach to the well photographed 13th century Belltower which forms one of the classic views of the town. Small narrow streets then took us uphill past pastel coloured houses. We bought a couple of ice creams from a café and finished our wander by going right out along the harbour wall. 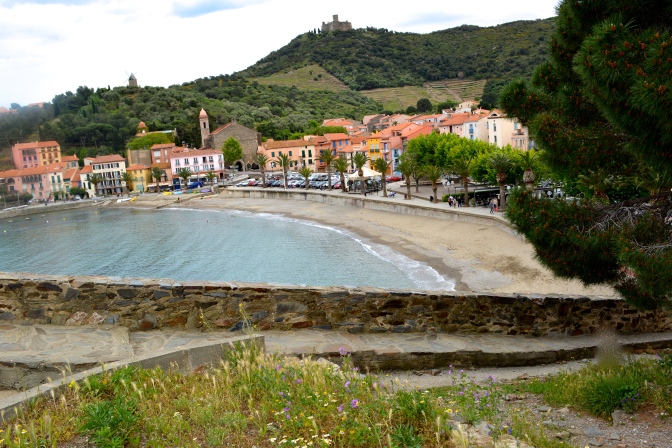 Picasso, Miro, Matisse, Gauguin had all flocked to paint this area, as had renowned Glasgow architect Charles Rennie Mackintosh in the early 20th century. Some of their oils and watercolours of here and nearby Port Vendres really had fired my imagination but the reality didn’t quite match the promise and I was quite happy to say goodbye to it.

Looking back at my photos of the resort, it looks much better but there was something about it I just didn’t take to. We were now only a short distance from the Spanish Border, just less than 2 hours drive from our accommodation for the next 2 nights in the wild Cap de Creus National Park in Catalonia.

As we followed the coast road through Port Vendres, I can’t say it appealed much either nor did the rest of the coast as we headed for Espana – ah well, not everywhere dazzles on a trip. We had left one artists’ enclave behind and, at Cap de Creus, were entering the much loved haunt of another huge name in the art world whose famous house and often bizarre but brilliant work I was determined to see more of here – Salvador Dali.