Weather forecast update. High winds forecast from mid afternoon – possible sandstorms likely where we were! Aarrghh! The lady at Skyrhusid had told us that the Ring Road road had been closed in two places just a few days before we’d arrived and a vehicle had been blown over in high winds.

My tendency to panic was calmed down by Chris who, even in a crisis, tends to remain horizontal. I was all for upping sticks NOW and leaving but he finally assured me that we had the morning to play with; as long as we got across the sandur areas before Vik by noon, we should be fine. I tried not to concentrate on the word ‘should’ as we had breakfast. So far, we’d had no rain so the forecast had been as wrong as ours often is – maybe that wind would come in sooner?

There was some fruit juice, yoghurt and fresh fruit left for guests and we also we had our first taste of Iceland’s famed ‘Skyr’ yoghurt. It was like a soft pannacotta, quite sweet. Very good. Made some toast and had my own muesli (another item brought with us). Gallons of tea as usual.

Back to the lagoon for another wander, then we drove down to the Ice Beach. From the lagoon, the icebergs travel down Iceland’s shortest river to the sea. Some are then washed back onto this beach, lining it with crystal clear or turquoise chunks of ice – a fantastic sight. It was fairly quiet too which was nice. There were seals about again and lots of eider ducks as well as the menacing skuas. Thankfully the Arctic Terns hadn’t nested yet and were very docile (they are worse than the Skuas for attacking if you accidentally go near their nests. They just don’t give up even when you leave the nest site.)

It was no hardship driving that road back again and it was now really sunny and clear making everything even more spectacular. We stopped a lot, just enjoying the fantastic landscapes of volcanic peaks etched with snow.

It’s a stunning area. Watched a beautiful Red Throated Diver, feeding in a tiny lochan beside the road, quite unfazed by us. Then a herd of reindeer appeared, another fine sight.

By 12 noon, we were at the Skaftafell National Park Centre, a nice complex with information, a shop and glacier walk adventure outfits and a campsite. It was a gorgeous day now, quite warm and no sign yet of the wind.

Walked up an excellent track to Svartifoss, the black waterfall.

I really liked this landscape of dwarf birch and short cropped grass and bearberry. Tundra like, very beautiful and the snow covered mountain peaks just set it off like a dream. It looked like great hiking country. The waterfall wasn’t anything special but the walk itself was well worth it. Perfect.

I was quite envious of people getting kitted out with crampons and boots for a hike up to the glacier. We do winter hillwalking at home, using crampons for any icy/snowy walking and I wondered if this was the first time these folks would be walking on ice , perhaps even seeing snow. Their faces suggested it was a big novelty. Great excitement all round.

I was a bit nervous now that our timescale had slipped. As we headed – again – across the biggest sandur in the world, sure enough , the wind picked up and sand began to swirl across the road! Waterfalls on the ridges were now blowing UP the way, a clear sign of strong winds. It seemed to have come out of nowhere, as wind does. Luckily, at this point, there wasn’t much more than occasional sand swirling a bit and we actually managed a brief stop at the beautiful Foss waterfalls, right beside the road. But it was definitely whipping up into a storm. We finally reached Klaustur, with the worst of the sandur behind us; still the Myrdalsandur to go but we recalled the terrain being much more moss covered. So, we reckoned we’d made it.

Got fuelled up and nearly blown over in the process by a bitterly cold wind (used to that in Scotland). A major effort to open the car door.

VIK AND A CAFÉ STOP

Stopped at Vik and shared a beefburger meal in a very nice traditional café building, the Halldorskaffi. £15 for a thin, not very tasty burger and pale, thin chips scattered unattractively across the plate. We don’t eat much at lunch so it wasn’t all about saving money but I was glad we’d stuck with the single plate. Cakes were £6 a slice! If anything we’d both usually have soup but that seemed incredibly expensive – £9 – 10 comes to mind. Ouch. But it was a very characterful place with an interesting information/book centre next door. Picked up some more supplies for tonight’s meal – plenty supermarkets around so far.

With 180km still to go, it seemed a LONG drive till the small turn off beyond Hella which would take us to Gullfoss. At 4pm, had a quick stop at Skogafoss, a tremendously powerful waterfall, even more so than Seljalandfoss. Couldn’t get anywhere near it with the camera, the spray was so powerful. Fine, fine sight and chock full of visitors. 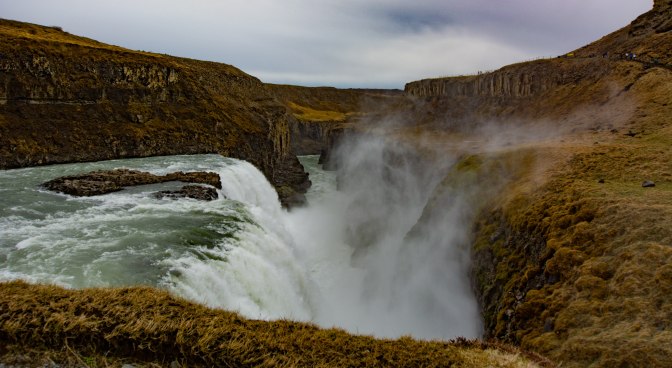 Took the turn off near Bitra on Route 30 which snaked towards Gullfoss. The landscape changed a lot now, much less interesting. We passed Tungufell where our next accommodation was, checked that it was quite easy to get to down a gravel road, then drove a short , good gravel section which joined the main road to Gullfoss itself. We were keen to see the falls while it was still overcast but dry.

What a sight it all is! Incredible. That opaque glacial green (the colour is stronger in winter.) We spent about half an hour just wandering along the good path and standing right beside the river as it thundered past. It was actually easier to get a photo close up than further away, given the wind direction which carried the spray along the access track. Glad we had the waterproofs!

It was really cold now too and we could just make out the glacier beyond the car park and the tops of mountains on either side. Nice shop and visitor complex at the car park but eye watering prices. Got some postcards.

Back to Tungufell, just over 15 minutes away, and a beautiful detached house on a horse breeding farm in gentle countryside. What a warm friendly welcome we had from Aggi and Chrissy. The house , called Jaoar, was lovely, cosy and warm, wood-lined, lots of space and even a big outside dining area. Wonderful place. Yet it was £163 for the night, the same as our previous lodging. And it would have slept a family. 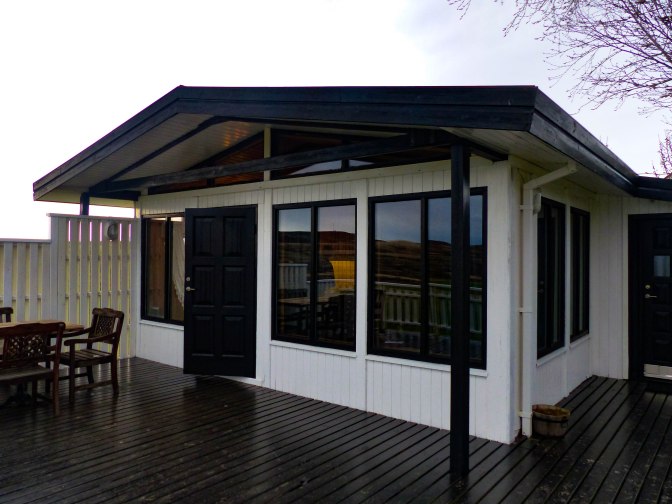 I love having a look at Visitor Books in cottages we stay in, to see what people are saying about their trip and this one was full of comments from Far Eastern visitors who’d stayed in winter. They loved the snow and ice.

Popped open a mini bottle of sparkling wine while Chris enjoyed his Chardonnay. Heated the spicy chicken drumsticks and wings, cooked some potatoes and made up a potato and onion salad, cooked some broccoli and we had a reasonably cheap tasty meal. (The chicken which we would buy for around £4 cost £9.)

Outside (it barely got dark fully), the horses and foals grazed and Golden Plovers and Snipe called. Redwings darted around.The Redwings are little winter visitors to Scotland from the more Arctic regions so it was lovely to see them in their favoured summer breeding area. Lovely, peaceful place all round.

ICELAND IN 4 DAYS  Day 3 To Snaefellsnes