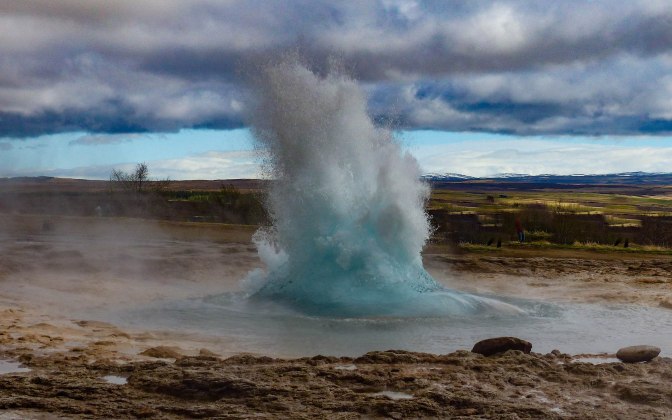 Aggi took us on a short tour of his farm in the Landrover next morning. The ponies are bred for dressage competition, the third most popular sport in Iceland after football and golf. Their home’s name meant ‘on the edge’ as next stop, North Iceland. Saw a ptarmigan and lots of golden plovers and redwings. He also pronounced Gullfoss as something like ‘Godfoss.’ 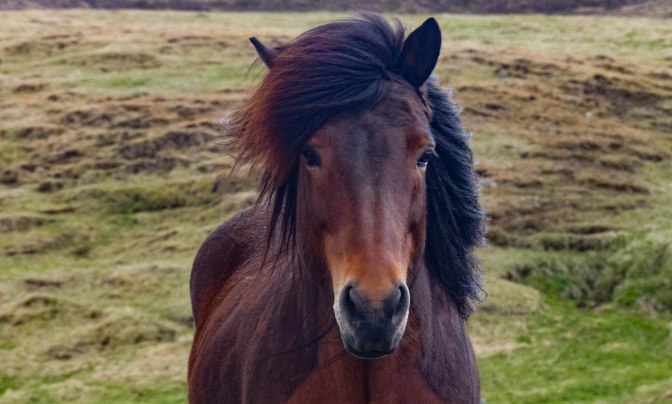 Aggi also remarked on how their climate is changing; they get only two weeks of snow most years on the farm now.

Said farewell to this lovely couple at 10am and made for Geyser and the direct route to Reykjavik.

Neither of us is huge about geysers but we felt we had to stop and see one. It was a pleasant, sunny day and we walked up to Stokkur geyser, the most reliable one for gushing. Sure enough, it exploded in a few minutes, like a firework. You could watch the water bubbling and beginning to blister, just before it blew. Great fun actually and we stayed around for its next blow.

Lovely visitor centre and café across the road (parking and ‘entry’ to all these sights is free).

Next stop and what seemed a very long drive, was Pingvellir, site of the world’s first Parliament in AD 930 and described as a ‘place of exceptional beauty’ by Lonely Planet. It’s a World Heritage site and is also the boundary of the tectonic plates of N. America and Europe. It was quite cloudy now so perhaps we didn’t see it all at its best but we were underwhelmed with the area and sights. There is nothing left to see as such regarding the parliament, just the rock areas where it was held. Perhaps we didn’t do it enough justice but after grabbing a £4 coffee in the small café , we decided to head on. 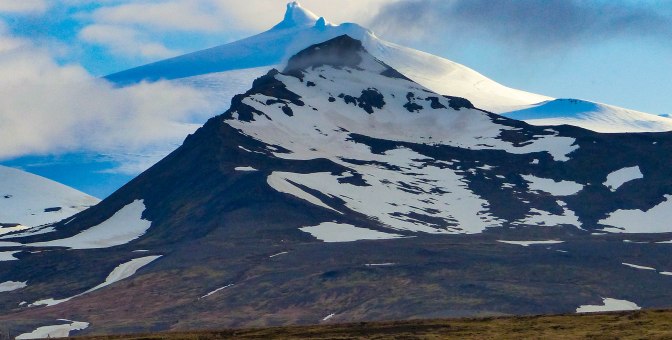 Now we were headed for the undersea Toll tunnel to Akranes and then Borganes. Nearer the coast, the mountains appeared again, looking really wonderful in the sunshine. In fact, we just had to stop after we emerged from the tunnel, just to take in the wonderful coastal mountains, a deep dun colour and etched with snow under blue skies. Fantastic.

Great roads all the way – still so much straighter than ours! But the driving took time. The roads, though good, are fairly narrow with steep drop offs on either side no doubt for drainage so there wasn’t a lot of room for error. With a 90km speed limit, distances took more time than they might suggest.

Stocked up on supplies and fuel at Bonus supermarket in Borganes which I thought had a terrific mountain backdrop. Any of the country round here, I would be happy to explore more of. It was all highly scenic.

We then took the cut off road to Snaefellsnes, route 54, then the 56, which became a hill road taking us over the volcanic heart of the peninsula with views opening up to the Westfjords and the ocean.

It was around 3.30pm now and we decided to head for Brimilsvellir, where our accommodation was near Olafsvik, instead of detouring to Stykkisholmur.

What a magnificent drive that was! 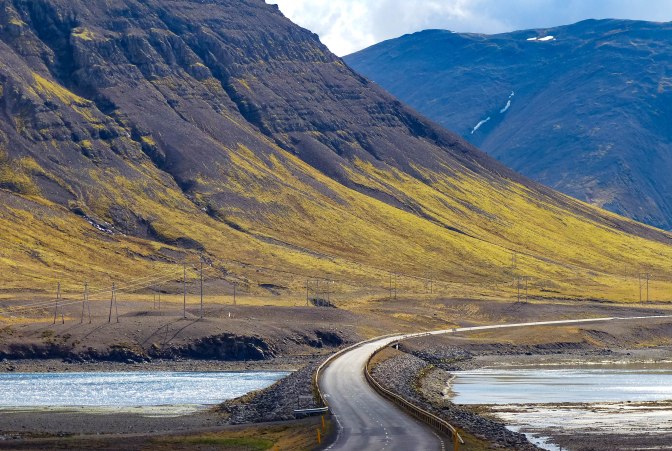 Shapely mountains rising straight out of the ocean, the sea sparkling blue, snow covered peaks. It actually reminded me a lot of some parts of western Scotland but was different too – I suddenly felt very much at home and my heart sang. 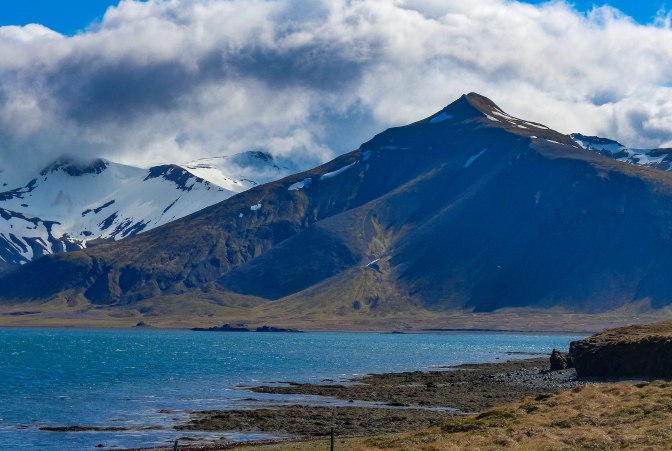 This , I could spend a lot more time in.

We stopped often, just drinking in the views. Then Grundarfjordur village appeared and the astonishing pyramid peak of Kirkjufell. It’s a cracker of a mountain, one of Iceland’s most iconic sights and it didn’t disappoint on that blue sky day.

We stopped to wander the track up and around the waterfalls which sit opposite the mountain, giving some great picture postcard scenes. Behind it all, snow covered volcanic peaks were the backdrop. Great country.

Several road side stops and 15 mins later, we were finally sweeping down a fine coastal road to miniscule Brimilvellir, just farm, a church , a house and our large cottage. What a great location to arrive at after another long day’s sightseeing. 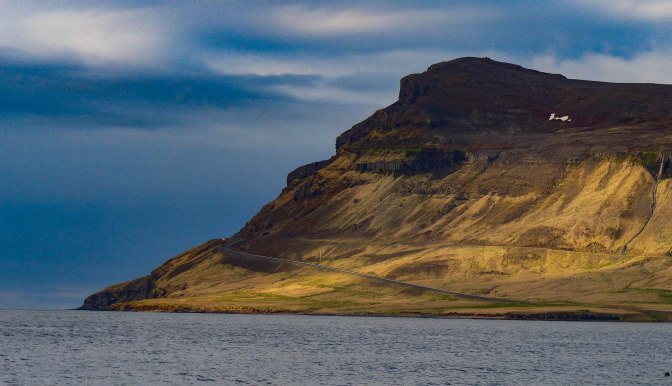 It was blowing a hoolie still but sunny skies prevailed and we had a wonderful view of snowy Snaefellsnes glacier and peak.

Our welcome was a bit less smiling though pleasant enough. I happened to remark on the wind and made some pleasantry about locals being used to it of course but our hostess’s remark was ‘well, you do get sick of it, you know?’ Didn’t sound very happy. She showed us the apartment, which was very spacious, windows all around with views to the sea and the mountains and wood cladding, all in pale blues and whites colours. Lovely (as it should be at £173 per night). Never saw her after this.

Drank a toast to another wonderful day’s touring then got some dinner on the go – stir fried chicken with chilli and curry spices and more potato salad and broccoli.Fruit and some chocolate afterwards. Stuffed full.

It was a gorgeous evening and I left Chris to relax with a book in the house while I walked down to the beach, just a few minutes away. A stony, slightly sandy beach with lots of birdlife – Skuas, Gannets, Oyster Catchers, Sanderlings, Turnstones and a new one for me – Red Knots. 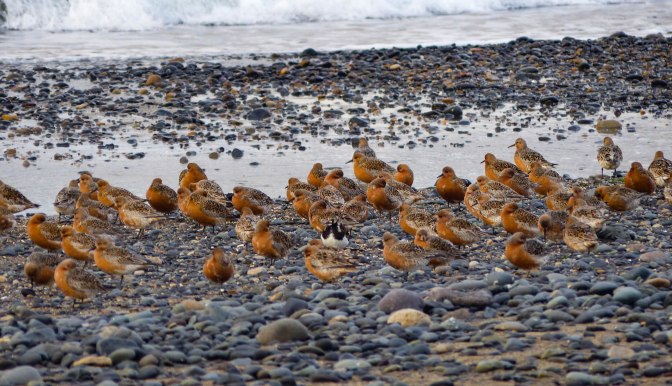 They were spectacular as they took off in front of me, a cloud of fluttering orange as the sun caught their beautiful plumage. 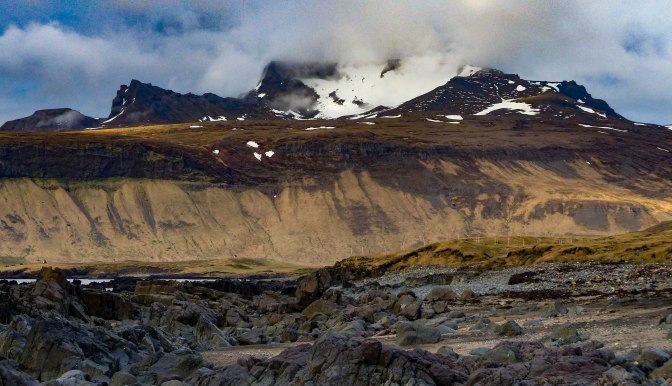 The mountain backdrop was lit up by the evening sun and the Westfjords mountains were on the distant horizon. Beautiful place and not a soul around. Had a look inside the church, a lovely old building.

Snipe drummed and Golden Plovers piped their lonely call as I made my way back to the house. So glad we had found this place.